Eating away at cognitive decline 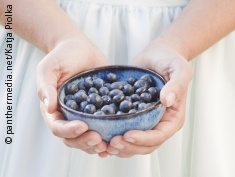 Blueberries are one of the more potent foods in terms of protecting the brain; © panthermedia.net/Katja Piolka

Eating a group of specific foods known as the MIND diet may slow cognitive decline among aging adults, even when the person is not at risk of developing Alzheimer's disease, according to researchers at Rush University Medical Center. This finding is in addition to a previous study by the research team that found that the MIND diet may reduce a person's risk in developing Alzheimer's disease.

The recent study shows that older adults who followed the MIND diet more rigorously showed an equivalent of being 7.5 years younger cognitively than those who followed the diet least. The results of the study recently were published online in the journal Alzheimer's & Dementia: The Journal of the Alzheimer's Association.

The National Institute of Aging funded study evaluated cognitive change over a period of 4.7 years among 960 older adults who were free of dementia on enrollment. Averaging 81.4 years in age, the study participants also were part of the Rush Memory and Aging Project, a study of residents of more than 40 retirement communities and senior public housing units in the Chicago area.

During the course of the study, they received annual, standardized testing for cognitive ability in five areas – episodic memory, working memory, semantic memory, visuospatial ability, and perceptual speed. The study group also completed annual food frequency questionnaires, allowing the researchers to compare participants' reported adherence to the MIND diet with changes in their cognitive abilities as measured by the tests.

Martha Clare Morris, ScD, a nutritional epidemiologist, and colleagues developed the diet, whose full name is the Mediterranean-DASH Diet Intervention for Neurodegenerative Delay. As the name suggests, the MIND diet is a hybrid of the Mediterranean and DASH (Dietary Approaches to Stop Hypertension) diets. Both diets have been found to reduce the risk of cardiovascular conditions, like hypertension, heart attack and stroke.

"Everyone experiences decline with aging; and Alzheimer's disease is now the sixth leading cause of death in the U.S., which accounts for 60 to 80 percent of dementia cases. Therefore, prevention of cognitive decline, the defining feature of dementia, is now more important than ever," Morris says. "Delaying dementia's onset by just five years can reduce the cost and prevalence by nearly half."

To adhere to and benefit from the MIND diet, a person would need to eat at least three servings of whole grains, a green leafy vegetable and one other vegetable every day – along with a glass of wine – snack most days on nuts, have beans every other day or so, eat poultry and berries at least twice a week and fish at least once a week. In addition, the study found that to have a real shot at avoiding the devastating effects of cognitive decline, he or she must limit intake of the designated unhealthy foods, especially butter (less than 1 tablespoon a day), sweets and pastries, whole fat cheese, and fried or fast food (less than a serving a week for any of the three).

Berries are the only fruit specifically to be included in the MIND diet. "Blueberries are one of the more potent foods in terms of protecting the brain," Morris says, and strawberries also have performed well in past studies of the effect of food on cognitive function.

"The MIND diet modifies the Mediterranean and DASH diets to highlight the foods and nutrients shown through the scientific literature to be associated with dementia prevention." Morris explains. "There is still a great deal of study we need to do in this area, and I expect that we'll make further modifications as the science on diet and the brain advances."

More about the Rush University Medical Center at: www.rush.edu