Education vital to the visually impaired 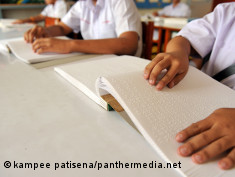 Education influences whether people who are visually impaired get jobs or not; © kampee patisena/ panthermedia.net

A new wide-ranging survey carried out by SINTEF has gathered the responses of nearly 1000 visually impaired people. The project 'Med jobb i sikte' (Work in mind) has included the first major survey of its kind since 1994. Whereas in previous surveys the emphasis was on facilitation and support schemes, focus has now turned to the factors that help and hinder the visually impaired from getting jobs.

The Norwegian Association for the Blind and Partially Sighted, which funded the project together with the Confederation of Norwegian Enterprise's (NHO) working environment fund, believes that there are good reasons for looking more closely into why young people are leaving upper secondary education without adequate university entry qualifications.

Under the old system, the visually impaired were not exempted from any subjects. Today it is possible to obtain exemptions for parts of some subjects such as English and Mathematics, to the extent that some students leave upper secondary school with big skills gaps. Researcher Thale Andersen at SINTEF Technology and Society tells Gemini that a greater proportion of visually impaired persons in work have both a secondary school education and a university degree when compared to the working population at large. The majority were also working while they were studying.

When asked about the obstacles they face in getting a job, they said that many of the challenges are self-imposed mental barriers. A poor self-image and lack of self-esteem make them relatively unaware that they have to sell themselves to potential employers. Other responses demonstrate that many problems are not directly related to their visual impairment, but to a lack of communication, knowledge and willingness among all the parties involved.

Among those visually impaired and currently living on benefits, 40 per cent said they would like to be in employment. Of these, 20 per cent have contacted potential employers and/or the Norwegian Labour and Welfare Administration's Help Centre for the Disabled (NAV – Hjelpemiddelsentralen). However, for many even this represents a major hurdle.

"When we ask the members of this group what they think might help them to get a job more quickly, they call for better facilitation and transport arrangements, awareness among decision-makers, and more proactive involvement by NAV," says Andersen, who goes on to say that the level of education in this group is lower than that among those in work. "Many in this group ended their education at 16. Some stayed on at school, but didn't stay the course," she says.

Those visually impaired on benefits view NAV in a more negative light than those in work, and believe that it's a lottery as to who gets help and who doesn't. They also say that employers are too taken up with job seekers' visual impairment, and pay no attention to their skills and expertise. At the same time, researchers observe that people who have other complaints or inhibitions in addition to their visual impairment are more likely to be on benefits than in employment. These additional problems may make it very challenging for those on benefits to get and stay in work.

"The findings of this survey confirm what we have seen before," says Sverre Fuglerud, Head of Section at the Norwegian Association for the Blind and Partially Sighted. "Education definitely influences whether the visually impaired get jobs or not," he says.

"This is why we are amazed at the extensive use of exemptions from challenging subjects such as English and Maths at school. In the past, courses were laid on for teachers at all grades on how best to adapt their teaching of the various subjects to the visually impaired. For example, it was even possible to teach geometry to the partially sighted," he says.

Fuglerud thinks that the current system catering for visually impaired pupils is not good enough, and that action should be taken to provide individual students with a better foundation for success. He demands action now and is not prepared to wait for new studies and reports.

Both groups point out the need for openness when discussing visual impairment and issues surrounding what the partially sighted need and what can they do without. Such openness will remove uncertainty among colleagues and pull down the barriers that prevent them from asking for and offering help.

The survey also revealed that there are problems linked to two major life events. For those who are born blind or partially sighted, the transition from education to employment is very demanding. Those who have become visually impaired in mid-life find it difficult to return to work.

"The precept of the project "Med jobb i sikte"(Work in mind) is that being in work promotes health," says Thale Andersen. "We are left with four topics at which we want to take a closer look," she says. "The first is to find an explanation for the differences between visually impaired people in work and those on benefit above and beyond their education and other issues. The second is to address communication and openness in all types of interrelationships. Thirdly, researchers want to look at physical, organisational and social facilitation. And finally, there is the management of the IA (Inclusive Working Life) arrangement in the workplace."

"We believe that an understanding of interactive management goes hand in hand with a good working environment in which the colleagues of visually impaired people take responsibility," says Andersen. The project "Med jobb i sikte" (Work in mind) in now entering its second year, and the Norwegian Association for the Blind and Partially Sighted is providing funding for a further year's research.

More about SINTEF at: www.sintef.com