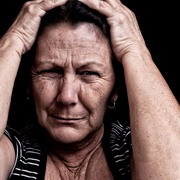 More than 40 per cent of Latino elders told Spanish-speaking interviewers that they had been abused or neglected in the last year — yet only 1.5 per cent of victims said they had ever reported the abuse to authorities.

"Our study has revealed a much higher rate of elder abuse among the Latino community than had been previously thought," said Marguerite DeLiema, lead author of the study. "This indicates that family solidarity within the Latino community does not necessarily protect older Latinos against elder abuse, as some research has suggested."

The researchers examined elder abuse that included physical or sexual abuse, psychological abuse, financial exploitation and caregiver neglect. Based on interviews conducted in Spanish in low-income Latino neighborhoods in Los Angeles, the researchers found that 10.7 per cent of elderly Latinos had been physically abused and 9 per cent of elderly Latinos said they had been sexually abused in the last year. Of those reporting physical abuse, more than half indicated they had been severely physically assaulted.

In addition, 16.7 per cent of Latino elders said they had been exploited financially and 11.7 per cent said they were neglected by their caregivers. Elderly Latinos who had been in the United States longer were more likely to be abused or neglected, the study found.

"Recent studies suggest that more than one in seven older adults is a victim of some type of elder abuse each year. We hope that these findings will bring greater national attention to the troubling issue of non-institutional elder abuse, particularly in areas with fewer community resources," said senior author Kathleen H. Wilber.

With limited English proficiency, ethnically segregated neighborhoods and cultural traditions that include reluctance to discuss problems outside the family, Latino elders are often overlooked in aging research, despite making up 6.7 per cent of the United States population aged 65 and older. Across all demographic groups, more than 5 million cases of elder abuse are estimated to occur annually in the USA.


- More about the University of Southern California at: www.usc.edu