Elderly Are Happier if Their Earlier Life Has Been Happy 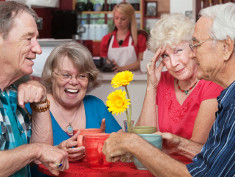 Living in residences or at home made no difference in happiness; © Scott Griessel/panthermedia.net

University of Granada researchers connect the present and past happiness of over 65s (men and women) with different personal and socio-demographic characteristics. The elderly persons that took part in the study claimed to be “significantly less happy now than before” (6.6 as opposed to 7.7, on a scale of 0-10).

People over 65 are happier if, before, they have had a happy life. Furthermore, non-depressive elderly people have family support and low stress levels, show “correct daily functioning” and are more satisfied with life at its end than their peers.

These are the results of a study by University of Granada researchers in which they have explored the current (at the time the research took place) and past (throughout their lives) happiness of over 65s (both men and women), with different personal and socio-demographic characteristics.

154 volunteers, ranging from 65 to 95 years old, took part in the study, in which they filled out a series of self-tests. The participants were chosen from different community contexts: private homes, day-care centres and residential homes. Of the volunteers, half of them were women and 35.7 percent were living in nursing or residential homes, while the other 64.3 percent lived in their own home (with or without family members or other people).

University of Granada lecturer, Debora Godoy Izquierdo, points out that the elderly persons that took part in the study said that they were “significantly less happy now than in the past” (6.6 as opposed to 7.7, on a scale of 0-10).

Godoy believes that the results of this study “highlight the importance of establishing mechanisms to correlate and predict both happiness and its foundations (affective equilibrium and life satisfaction), in order to develop treatments geared towards promoting the subjective welfare of the elderly, given that, compared with other times in their lives, happiness may just come down to recognising a late adulthood”.

More about the University of Granada at: www.ugr.es