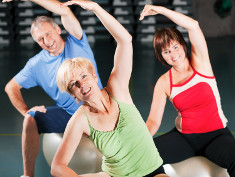 Fitness DVDs are a multimillion-dollar business, and those targeting adults over the age of 55 are a major part of the market. With names like "Boomers on the Move," "Stronger Seniors" and "Ageless Yoga," the programs promise much, but few have ever been rigorously tested.

"There are tons of DVDs out there, 20 percent of them are purchased by older adults, and with few exceptions there is no evidence that they work," said University of Illinois kinesiology and community health professor Edward McAuley, who led a new study testing the efficacy of a home-based DVD exercise program for people 65 and older.

The researchers recruited 307 older adults from 83 towns and cities in Central Illinois. Half of the participants used a special fitness video at home. The others, a control group, watched a different video about healthy aging.

The fitness video was an outgrowth of years of research on interventions to enhance the health of older adults. The program, called "FlexToBa", was designed to improve flexibility, toning and balance, three components of function associated with the maintenance of independent living and avoidance of disability in older adults.

The FlexToBa video included several hours of instruction presented over six sessions meant to encourage progressive exercise three times a week over six months. New challenges each month helped keep participants engaged and encouraged them to build on their achievements.

In each session of the FlexToBa video, a presenter demonstrated a series of exercises, with age-appropriate models offering alternate approaches for those who found the exercises too challenging or too easy. "We were very conscious of the fact that we wanted to make something that would reach a broad array of performance levels and physical capabilities," McAuley said.

Participants were asked to complete daily exercise logs and received short support telephone calls with exercise tips every other week for the first two months, and then every month. The control group also received the telephone calls.

The researchers were interested in whether a home-based exercise program could be as effective as classes offered in a central location, McAuley said. "When we run these trials here (at the university) it's a lot of time, a lot of effort and can be an inconvenience for participants," he said. "Physical activity is one of those behaviors that people find very easy to see as inconvenient and they will come up with any excuse not to do it."

A home-based program could reach many more people than a center-based intervention, and at a much lower cost, he said.
At the end of the six months, those who stayed with the FlexToBa program saw "clinically important" improvements in scores on a battery of tests of physical function as compared with the control group. These tests assess strength, balance and gait, and have proven to be useful indicators of future performance, disability and independence in older adults. Unlike those in the control group, FlexToBa participants saw increases in their upper body strength and balance, and were able to maintain their previous level of lower body flexibility.

"This has important implications for an increasingly elderly population who are at risk for subsequent declines in function and increased disability," McAuley said. "We now know that this type of program can help to prevent that decline, and possibly reverse it."

More about the University of Illinois at Urbana-Champaign at: www.uiuc.edu