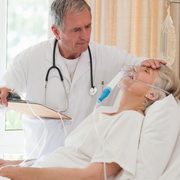 A new study of University of North Carolina School of Medicine finds that people 75 years old or older are less likely to receive any pain medication in hospital emergency departments than middle aged people – those between 35 and 54 years old.

And these differences remained even after researchers took into account how much pain the patients were having, said Timothy F. Platts-Mills. For example, among older adults reporting severe pain, 67 per cent received pain medication, compared to 79 per cent of middle aged patients with severe pain.

"We are not exactly sure why this happens," Platts-Mills said. "It may be because physicians are more concerned about potential side effects in this population.

"To us, the gap we observe in pain management for older patients highlights the need to better understand how best to manage pain in older patients and understand the barriers to doing this. All patients, regardless of age, deserve to have relief from pain, especially when it is severe. Our group is actively investigating the side effects of commonly used pain medication and the impact of pain on functional outcomes after injury in older adults. We think that for most older emergency department patients providing effective treatment for acute pain is likely to result in a substantial net benefit," Platts-Mills said.

Emergency departments (EDs) are an important source of acute care for older adults, with over 20 million ED visits by patients 65 and older each year. Almost half of these visits are for the evaluation and treatment of pain.

Platts-Mills and colleagues conducted a secondary analysis of data collected from United States emergency departments between 2003 and 2009 in order to test the hypothesis that older adults who come to the ED with a primary complaint of pain are less likely to receive pain medication than younger patients.


- More about the University of North Carolina School of Medicine at: www.med.unc.edu