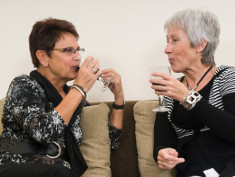 A new study suggests that frequent binge drinking is associated with insomnia symptoms in older adults.

Results show that overall, 26.2 percent of participants had two or less binge drinking days per week, on average, and 3.1 percent had more than two days per week, on average. After adjustment for demographic variables, medical conditions, and elevated depressive symptoms, participants who binged on an average of more than two days a week had an 84 percent greater odds of reporting an insomnia symptom compared to non-binge drinkers.

The study involved 4,970 community-dwelling adults ages 55 and older from the 2004 wave of the Health and Retirement Study who reported having ever consumed alcohol, and who had completed all binge drinking and insomnia-related questions. Participants reported the number of days on which they had "four or more drinks on one occasion" in the prior three months. Responses were used to calculate the mean number of binge drinking days per week, which was the primary predictor. Participants also reported the frequency of difficulty falling asleep, trouble staying asleep, waking too early or feeling unrested in the morning. Those reporting any of these "most of the time" were considered to have an insomnia symptom, which served as the outcome.

According to the authors, this is the first study to their knowledge that examines binge drinking and its association with insomnia symptoms in older adults.

"Clinicians and health care providers should be aware of and discuss the use of alcohol with their older patients, particularly those who report poor sleep," said Canham. "Binge drinking behaviors may be an appropriate target for improving poor sleep."

More about the American Academy of Sleep Medicine at: www.aasmnet.org