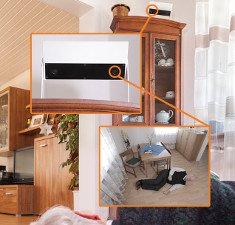 The sensor box registers the emergency situation in seconds and notifies the alarm unit in the home;
© Fraunhofer IPA

Single seniors lead a risky life: after a fall, they often lie on the floor several hours before their awkward predicament is discovered. A sensor system detects these emergency situations automatically and sends an emergency signal.

Mr. S. is visually impaired and dependent on a cane since suffering a stroke. Nevertheless, as a 70-year old living alone, he would rather not move into a care home. Most older people harbor this wish. They want to stay in their own familiar surroundings and continue to live independently for as long as possible. According to data from the German Federal Statistical Office, this applies to 70 percent of seniors. Against better judgment, they are putting their health at risk, for not only does the risk of cardiovascular problems increase with age, but the risk of falling increases also. According to estimates, about 30 percent of those over 65 years of age living at home experience a fall at least once a year. For those over 80 years old, it is more than 40 percent.

Many of the accidents happen during daily housework. However, older persons who are unsure on their feet frequently have accidents at night as well. Often it is hours before they are assisted. They cannot always trigger a domestic emergency device, often called a radio button – because they are not wearing the device, are unconscious, or injured. An emergency alarm like this therefore only offers limited help, just as sensors worn on the body. These sensors react as well to rapid hand movements and are therefore particularly prone to triggering false alarms. Sensors built into the floor no doubt detect emergencies, but they can only be installed through extensive construction at great financial expense.

A system that was maintenance-free, able to detect emergency situations automatically, and could be integrated cost-effectively into every home without restricting the movement of the occupant would be quite helpful. Such a solution, providing safety in every room, is currently under development by researchers at the Fraunhofer Institute for Manufacturing Engineering and Automation IPA using safe@home. Sensors boxes installed like smoke detectors on the ceiling register when a person falls or needs assistance. If a box detects an emergency situation, it notifies the alarm unit in the home, the CareBox. This unit immediately calls for help – by telephone, cell phone, or internet.

The system works with highly sensitive optical and acoustic sensors that determine the location and condition of a person as well as their movements within a room. The technology uses this data to detect a fall within seconds and identifies a motionless state if no movements are detected within a specific period of time. The system also responds to cries for help. “The occupant is immediately phoned by the CareBox in order to exclude a false alarm. A computer-generated voice asks how they are. The occupant can cancel the alarm by answering. If they fail to answer the phone, safe@home identifies it as an actual emergency,” explains Marius Pflüger, a scientist at IPA in Stuttgart. In this case, family members, neighbors, or care givers are notified. “The sensor boxes, which are about the size of a box of chocolates, operate unobtrusively and automatically. Changing batteries, activating the hardware – none of this is necessary. Privacy is also assured, since the data are evaluated directly in the sensor without having to be stored or transmitted,” says Pflüger.

Prototypes of the emergency detection system have been undergoing round-the-clock operational testing in six residential care home units since mid-2012. In order to establish statistically significant detection rates, emergency situations were simulated in addition to evaluating normal operation. So far, the subjects of the test system have accepted the system and do not feel the the sensor boxes are annoying. Instead, they fulfilled their main requirement of enhancing personal safety. The seniors assess the automatic confirmation as useful. “One reason for the high acceptance rates are the comprehensive interviews we carry out in advance with potential users in order to find out what they value in a fall detection system,” says Pflüger. The most important thing for those interviewed was that the system work reliably and properly in every room during routine daily life, and that it could be integrated in every kind of living space. Those interviewed also wanted to have as little contact with the technology as possible.

Safe@home should be ready for market in late 2014. Pflüger and his team are assuming high market demand. There are already over 5.4 million people in Germany 60 years and older living alone in their own homes today. In 2030, 33 percent of the population in this country will be over 65.