Elderly: Highest risk for outdoor falls is walking out of necessity 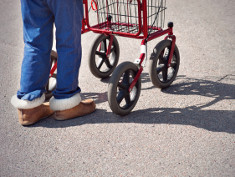 Older adults have two times the risk of falling while walking out of necessity than walking for recreation; © Ying Feng Johansson/panthermedia.net

Older adults are at a greater danger of falling when walking for utilitarian purposes such as shopping and appointments than when walking for recreation, according to a study from University of Massachusetts Medical School.

"Older adults have two times the risk of falling while walking out of necessity than walking for recreation, and four times greater risk of injury from a fall on a sidewalk than in a recreational area," said Wenjun Li, associate professor of medicine in the Division of Preventive and Behavioral Health at UMMS and lead author of the study.

Li and co-authors at the Massachusetts Department of Public Health (DPH), Harvard Medical School and UMass Boston investigated the association between the walking habits of older adults, the socioeconomic status of their neighborhoods, and the occurrence of outdoor falls using data from the Maintenance of Balance, Independent Living, Intellect and Zest in the Elderly of Boston Study which measured multiple attributes that might impact an individual's risk of falling. They found that older adults in poorer neighborhoods do more walking for appointments or errands and experience higher rates of fall on sidewalks, streets and curbs. Falls on sidewalks and streets were more likely to result in an injury than were falls in recreational areas despite the fact that they walked far less than recreational-only and dual walkers.

"These differences were not explained by individual factors such as an elder's health, leading us to conclude the environment may play a significant role," noted Li. "Further research will explore how elders interact with their environment and how to make neighborhoods safer for utilitarian walking."

With falls the leading cause of fatal and nonfatal injuries in adults aged 65 and older, fall prevention is one of the four priorities of the Prevention and Wellness Trust Fund which was established by the DPH in July 2012. Created to reduce health care costs by preventing chronic conditions in communities across the Commonwealth, the trust fund is the largest public health program in state history.

"This study will further inform our ongoing work to prevent falls among older adults," said Madeleine Biondolillo, associate commissioner of the DPH and a co-author of the study.

Recognizing the impact that the built environment has on falls, DPH has collaborated with the Massachusetts Association of Councils on Aging to develop a Healthy Community Design program. It has also funded seven Mass in Motion communities to actively work with stakeholders on policy, systems and environmental approaches to healthy aging.

"Improving the safety of walking environments in areas where older adults shop and do other errands of necessity is an important component of fall prevention," Li and the DPH concluded.

More about the University of Massachusetts Medical School at: www.umassmed.edu