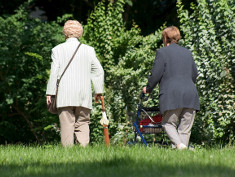 Older patients who know they are at risk of fractures will make positive lifestyle changes to avoid them, such as exercising, wearing proper footwear and taking supplements, a new study has found.

“The findings are important because much previous research in bone health has focused on medications or found that people make negative lifestyle changes such as reducing housework or leisure activities because they are afraid of falling,” said Joanna Sale, a researcher at St. Michael's Hospital and lead author of the study.

Half of all women over the age of 50 and one in five men over 50 will have a fracture after falling from standing height or lower. Having one such fracture doubles a person's risk of having another.

Sale, a clinical epidemiologist, said her research was aimed at finding ways to prevent those repeat fractures, particularly hip fractures, because about half of all hip fracture patients die or end up in long-term care facilities.

Sale's study looked at patients over 65 who participated in the Osteoporosis Exemplary Care Program at St. Michael's Fracture Clinic. Research participants were interviewed about their perceived fracture risk, recommendations they received about their bone health, results of bone density tests and any lifestyle or behavioral changes they made since their last fracture.

All but one participant appeared to understand they had low bone mass and were at risk of a future fracture, but many were confused about the significance of bone density.

Many said they didn't want to think about the possibility of a future fracture and felt they had little control over risk factors such as age – yet they all engaged in a number of daily behavioral strategies to manage their fracture risk. Most were concerned about being careful, such as using handrails or wearing proper shoes.

But they also said they were considering or taking prescribed medications, were exercising more, eating a healthy diet and taking supplements or using walking aids or devices.

Sale said she believes the results of her study are in part due to the Osteoporosis Exemplary Care Program at St. Michael's that includes a coordinator who educates and follows up with patients.

More about the St. Michael's Hospital at: www.stmichaelshospital.com