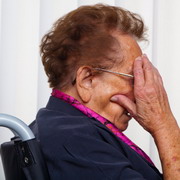 In a summer with unprecedented weather events, from tornados, floods, fires and hurricanes, researchers at the University of Pennsylvania School of Nursing found that physiological changes associated with aging and the presence of chronic illness make older adults more susceptible to illness or injury, even death, during a disaster.

Investigators followed 17 long-term care residents, with a mean age of 86, who were evacuated for five days due to a severe summer storm and were relocated to different facilities with different care providers and physical surroundings. The displaced participants experienced delirium, cognitive changes, hospitalisations, and death.

The 17 participants were part of a broader intervention study testing the effectiveness of a nursing intervention to improve vision and hearing impairment and decrease incident delirium and other outcomes.

As part of the parent study residents were measured with four different tests. The MMSE is a 30-item mental status test that includes questions on orientation, language, attention and recall.

The GDS is a 30-item interview based depression rating scale requiring yes or no responses, the NEECHAM is a 9-item nurse rated scale that includes the participant's vital signs and pulse, which is designed to assess for acute confusion/delirium and the mCAM, another delirium assessment tool which includes tasks to assess attention.

The participants were all screened with the NEECHAM and the mCAM on the day of the severe storm and three times a week for two weeks upon their return to their home facility. The scores were compared with their Week 1 scores.

"This study provided documentation of what clinicians have known for some time, but such anecdotal accounts are seldom described with the clinical instrumentation described here," said Cacchione. "Unexpected relocation often leads to poor outcomes for nursing home residents."


- More about the University of Pennsylvania School of Nursing at: www.nursing.upenn.edu