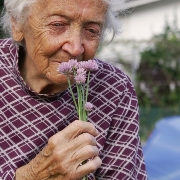 In higher age the ability of smelling
gets worse; © panthermedia.net/
Maximilian Boschi

Scientists found that olfactory sensory neurons in those 60 and over showed an unexpected response to odor that made it more difficult to distinguish specific smells, putting them at greater risk from dangerous chemicals and poor nutrition.

"We found clear changes in olfactory sensory neuron responses to odors for those 60 and up," said Diego Restrepo, director of the Center for NeuroScience at the University of Colorado School of Medicine who led the researchers.

According to the study those losing their sense of smell are at a higher risk of malnutrition since taste and smell are closely related, they may also be unable to detect spoiled food, leaking gas or toxic vapors.

Researchers looked at 440 subjects in two age groups – those 45- years-old and younger and those 60 and over. Their olfactory sensory neurons (OSNs) were tested for their responses to two distinct odors as well as subsets of those odors.

Restrepo wanted to determine if age-related differences in the function of OSNs might contribute to an impairment of the sense of smell. For this, in a collaboration with Monell Chemical Senses Center in Philadelphia, researchers biopsied cells from both age groups.

"Whereas cells from younger donors were highly selective in the odorants to which they responded, cells from older donors were more likely to respond to multiple odor stimuli … suggesting a loss of specificity," the study said.

The scientists had expected to find less OSNs in older subjects and they thought the neurons would be less likely to respond to stimuli. In fact, they found as many neurons in the old as the young but those over 60 could not differentiate between two odors, they blended together.

The study suggests that changes in nose and the brain contribute to smell loss in the elderly, Restrepo said.


- More about the University of Colorado Denver at: www.ucdenver.edu