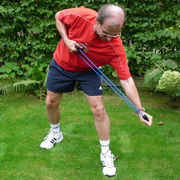 Even moderate exercising, like
stretching, leads to improvements
in memory and brain health;
© Dieter Schütz/Pixelio.de

A new study shows that one year of moderate physical exercise can increase the size of the brain's hippocampus in older adults, leading to an improvement in spatial memory.

The project – conducted by researchers at the University of Pittsburgh, University of Illinois, Rice University, and Ohio State University – is considered the first study of its kind focusing on older adults who are already experiencing atrophy of the hippocampus, the brain structure involved in all forms of memory formation.

The scientists recruited 120 sedentary older people without dementia and randomly placed them in one of two groups – those who began an exercise regimen of walking around a track for 40 minutes a day, three days a week, or those limited to stretching and toning exercises. Magnetic resonance images were collected before the intervention, after six months, and at the end of the one-year study.

Spatial memory tests were conducted for all participants at the three intervals. Those in the aerobic exercise group showed improved memory function, when measured against their performance at the start of the study, an improvement associated with the increased size of the hippocampus. The authors also examined several biomarkers associated with brain health, including brain-derived neurotrophic factor (BDNF), a small molecule that is involved in learning and memory. They found that the increases in hippocampal size were associated with increased amounts of BDNF.

"We think of the atrophy of the hippocampus in later life as almost inevitable," said Kirk Erickson, professor of psychology at the University of Pittsburgh. "But we've shown that even moderate exercise for one year can increase the size of that structure. The brain at that stage remains modifiable."

"The results of our study are particularly interesting in that they suggest that even modest amounts of exercise by sedentary older adults can lead to substantial improvements in memory and brain health," said Art Kramer, director of the Beckman Institute at the University of Illinois. "Such improvements have important implications for the health of our citizens and the expanding population of older adults worldwide."


- More about the University of Illinois at Urbana-Champaign at www.uiuc.edu