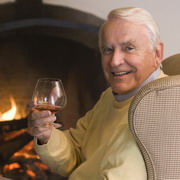 Moderate drinking can be definitely
effective for the health of elderly
people; © panthermedia.net/
Monkeybusiness Images

The Royal College of Psychiatrists of London has published a report related primarily to problems of unrecognised alcohol misuse among the elderly. The report provides guidelines for psychiatrists and family physicians on how to find and how to treat elderly people with misuse of alcohol and drugs.

There is no question that, on average, very elderly people may be more sensitive to the effects of alcohol (especially those individuals with chronic diseases, lower muscle mass, a poor diet, etc.) It should be made clear, however, that 65-year-olds are healthier than people of that age a generation ago - age-specific disability rates are decreasing, not increasing.

The report also recommends lower "sensible limits" for older people in comparison with younger people. Scientific reviewers point out inherent difficulties in providing guidelines for a very non-homogenous group of individuals whose only criterion for inclusion, in this paper, is being above the age of 65 years. Such a group includes individuals varying from marathon runners to very sick, frail people.

The report was conspicuously lacking in a discussion of the important role that moderate drinking can play in reducing the risk of coronary heart disease, ischemic stroke, diabetes, dementia, and osteoporosis. Forum reviewers thought that advice to lower limits of drinking for everyone in this age group is not based on reliable research, and would certainly not apply to all people aged 65 years or older. Of more importance, the absolute risk for cardiovascular diseases increases markedly with age, and therefore the beneficial or protective effect of light to moderate drinking on cardiovascular diseases is greater in the elderly than in younger people.

Evidence is also accumulating that shows that the risk of Alzheimer's disease and other types of dementia is lower among moderate drinkers than among abstainers. Neurodegenerative disorders are key causes of disability and death among elderly people. Epidemiological studies have suggested that regular dietary intake of flavonoid-rich foods and/or beverages has been associated with 50 per cent reduction in the risk of dementia, a preservation of cognitive performance with ageing, a delay in the onset of Alzheimer's disease and a reduction in the risk of developing Parkinson's disease.

Attempting to persuade elderly people who currently drink moderately to decrease their current intake may not be advisable. For healthy moderate and responsible drinkers, advice to reduce or stop all alcoholic beverage intake would not be in the best health interests of such individuals.