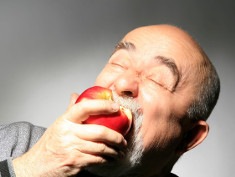 Vitamins are healthy and can prevent mobility problems in the elderly;
© Ivan Grlic/panthermedia.net

Vitamin D-deficient older individuals are more likely to struggle with everyday tasks such as dressing or climbing stairs, according to a recent study by The Endocrine Society.

Scientists estimate many as 90 percent of older individuals are vitamin D deficient. The vitamin – typically absorbed from sunlight or on a supplementary basis through diet – plays a key role in bone and muscle health. Vitamin D deficiency can lead to a decline in bone density, muscle weakness, osteoporosis or broken bones.

"Seniors who have low levels of vitamin D are more likely to have mobility limitations and to see their physical functioning decline over time," said the study's lead author, Evelien Sohl, of VU University Medical Center in Amsterdam, the Netherlands. "Older individuals with these limitations are more likely to be admitted to nursing homes and face a higher risk of mortality."

Using data from an ongoing Dutch cohort study (The Longitudinal Aging Study Amsterdam), the researchers examined among two groups – 762 people between the ages of 65 and 88, and 597 people between the ages of 55 and 65 – over the course of six years. Using blood test results, the subjects were split into groups with the highest, moderate and lowest vitamin D levels. To assess mobility limitations, participants were asked about their ability to perform routine tasks, including sitting down and standing up from a chair or walking outside for 5 minutes without resting.

"The findings indicate low vitamin D levels in older individuals may contribute to the declining ability to perform daily activities and live independently," Sohl said. "Vitamin D supplementation could provide a way to prevent physical decline, but the idea needs to be explored further with additional studies."

More about The Endocrine Society at: www.endo-society.org