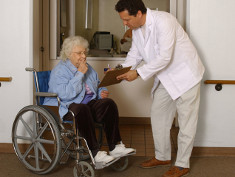 Traditional emergency departments are not equipped for geriatric assessment and intervention;
© James Steidl/panthermedia.net

Emergency departments are not meeting the needs of senior citizens, according to a new international study.

The study, which looked at patients over the age of 75 in emergency departments in Australia, Belgium, Canada, Germany, Iceland, India and Sweden, found that seniors have very different needs than the general population – needs that are not being addressed well by current clinical practices or emergency department designs.

"The majority of older patients attending emergency departments are frail and dependent on others for help. They have distinct and often complex needs," said John Hirdes from the University of Waterloo's School of Public Health and Health Systems and senior fellow of interRAI, the organization behind the study. "Traditional emergency departments are not equipped for geriatric assessment and intervention because they were designed and staffed to respond to severe acute illnesses and injuries."

"When you bring an already frail person into a chaotic hospital environment like an emergency department, the risk for misdiagnosis or inadequate care is high. There often aren't the trained specialists available, so geriatric conditions like delirium can be misdiagnosed as dementia," said Hirdes.

The study found that 78 per cent of seniors arriving at emergency departments were dependent in activities of daily living, had a cognitive problem or had fallen in the past 90 days. The pattern was consistent across all nations.

26 per cent of seniors presenting at emergency departments displayed cognitive impairment, a six per cent increase prior to arrival. In 16 per cent of patients there was evidence of an acute change in mental state, suggesting the presence of delirium. "We need to think about managing seniors in emergency rooms in a different way," said Hirdes.

"The absence of life-threatening injuries doesn't mean seniors and their families don't have serious health needs," said Hirdes. "There is often the sense that seniors are wasting resources in emergency departments, which is simply untrue. Refining approaches to managing older patients would allow hospitals to meet the needs of the aging population while still providing traditional services to high-risk patients."

The findings are part of the most extensive international study on the characteristics and outcomes of older emergency department patients. Data were collected using a geriatric assessment tool developed by Waterloo researchers in collaboration with interRAI. The study measured the physical function and cognition of 2,282 patients in 13 emergency departments in 7 nations, including Canada.

More about the University of Waterloo at: www.uwaterloo.ca