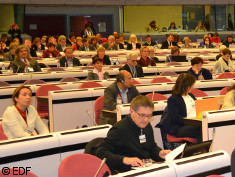 The audience of the conference during the European Day of Persons with Disabilities; © EDF

Having a job is the best guarantee for human dignity, self-esteem, financial independence and prosperity. Accessibility is a key to ensuring true participation in society and helps removing barriers that persons with disabilities still face in their daily life. Employment and accessibility consisted the main focus of this year’s conference for the European Day of Persons with Disabilities, organised by the European Commission and the European Disability Forum (EDF). Entitled 'Building together a barrier-free Europe', the conference took place on 2-3 December 2014 bringing together hundreds of persons with disabilities, their representative organisations, EU policy makers, service providers, think tanks, trade unions and employers.

EDF President, Yannis Vardakastanis, and the Head of Unit for the rights of persons with disabilities of the European Commission, Maria Luisa Cabral, opened the conference.

EDF President underlined the challenges of the upcoming period explaining why 2015 will be an important political year: "The EU report on the implementation of the UN Convention on the Rights of Persons with Disabilities (UN CRPD) will be submitted to the UN Committee, EDF will also submit its own alternative report, Europe 2020 and the Disability Strategy will be reviewed. It’s also a year with new actors, since we are in the beginning of the new mandate of the European Parliament and the Commission, while we also have a new Head of Unit for the rights of persons with disabilities and the move of the Unit from DG Justice to DG Employment. For all these reasons, 2015 will be a key political year and we all need to work in a collective way to achieve what we fought for in the last years," said Yannis Vardakastanis.

However, EDF President regretted the lack of high level political participation from the side of the Commission hoping that next year there will be stronger political commitment.

From her side, Maria Luisa Cabral, emphasized that job creation and the prevention of discrimination are a priority for the European Commission, while she also said that the Commission is working on the preparation of the European Accessibility Act to deliver the best possible piece of legislation.

More about the European Disability Forum at: www.edf-feph.org