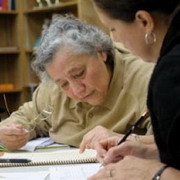 A program designed to boost cognition in older adults also increased their openness to new experiences, researchers report, demonstrating for the first time that a non-drug intervention in older adults can change a personality trait once thought to be fixed throughout the lifespan.

Personality psychologists describe openness as one of five major personality traits. Studies suggest that the other four traits (agreeableness, conscientiousness, neuroticism and extraversion) operate independently of a person's cognitive abilities. But openness – being flexible and creative, embracing new ideas and taking on challenging intellectual or cultural pursuits – does appear to be correlated with cognitive abilities.

The new study gave older adults a series of pattern-recognition and problem-solving tasks and puzzles that they could perform at home. Participants ranged in age from 60 to 94 years and worked at their own pace, getting more challenging tasks each week when they came to the lab to return materials.

"We wanted participants to feel challenged but not overwhelmed," said Elizabeth Stine-Morrow of University of Illinois. "While we did not explicitly test this, we suspect that the training program – adapted in difficulty in sync with skill development – was important in leading to increased openness. Growing confidence in their reasoning abilities possibly enabled greater enjoyment of intellectually challenging and creative endeavours."

Researchers tested the cognitive abilities and personality traits of 183 participants and a control group of 131 older adults a few weeks before and after the intervention.

At the end of the program, those who had engaged in the training and practice sessions saw improvement in their pattern-recognition and problem-solving skills, while those in the control group did not. And those who improved in these inductive reasoning skills also demonstrated a moderate but significant increase in openness.

"There are certain models that say, functionally, personality does not change after age 20 or age 30. You reach adulthood and pretty much you are who you are," said Brent Roberts. "There is some truth to that at some level. But here you have a study that has successfully changed personality traits in a set of individuals who are (on average) 75. And that opens up a whole bunch of wonderful issues to think about."


- More about the University of Illinois at: www.illinois.edu