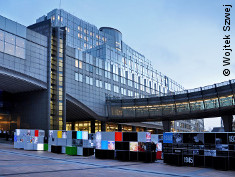 The festival organisers will give a short presentation on 30th September 2015 at 5.00 pm in the European Parliament in Brussels; © Wojtek Szwej

The European Film Festival 'Integration You and Me' celebrated its 10th anniversary in 2013. For this decade it managed to pave the way for the subject of disability in the media and among the general public. It has been an inspiration for organising dozens of similar events not only in Koszalin, but also in other parts of Poland and even Europe.

Once intimate and modest, today the festival is a widespread modern event. In 2013 it was presented in London and also in some European institutions, this way giving space for the topic of disability. Artists with disabilities are among the presenters – with their remarkable achievements and talents.

"We talk about barriers and we break them," the film festival organisers say. They are especially proud of one part of the event, called 'Discussion without Barriers', where all kind of questions are welcomed, there are no taboo topics and a spirit of respect and understanding can be felt. Usually underestimated by the general public topics are discussed, sometimes challenged, and controversies are debated. Each edition has its own unique theme like sport, sexuality or parenting.

In 2003 to 2014 over 400 extraordinary films from around the world were presented, showing the struggles of disabled people in their everyday lives in Poland. The way concepts like 'integration', 'barriers' and 'tolerance' are perceived on different continents is another feature of the film festival. Each year feature films, documentary films and amateur films compete and the best of them are awarded a statue of 'Motyl' ('The Butterfly').

Although the topic of the Festival changes every year, its main idea remains the same, namely working for the inclusion of disabled people in society, and thus promoting human rights and independent living. The festival reviews are held in over 40 Polish cites and in several other countries such as the United Kingdom, Italy, Turkey and Romania. Thanks to the support from MEP Marek Plura the festival organisers will give a short presentation on 30th September 2015 at 5.00 pm in the European Parliament in Brussels. This presentation is included in ENIL Freedom Drive programme and all Freedom Drivers are kindly invited to participate.