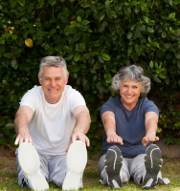 A current Canadian study shows that it is never too late to start exercising. Even the very elderly and frail can draw numerous benefits from regular group exercises.

As Louis Bherer, Laboratory Director and Researcher at the Institut universitaire de gériatrie de Montréal (IUGM), has found out, elderly, sedentary and even very frail citizens benefitted from regular group exercises in which they participated. The study found the participants to gain improved physical capacity and cognitive performance just within three month.

Physically, the participants’ functional capacities and endurance improved. Higher processing speed and better working memory are among the mental benefits. These particular improvements resulted in an overall improvement in the quality of life, since the study’s participants could pursue recreational activities and social and family relationships more actively and had a better physical health.

Bherer concludes that the publication of his findings will help both the healthy and the frail senior citizens to stay at home longer. Frailty is associated with a higher risk of falls, hospitalizations, cognitive decline, psychological distress and other adverse health effects. According to Dr. Bherer, it was the first time that frail senior citizens could participate in a study on exercise. This was made possible through close supervision by the medical doctors at IUGM. Bherer hopes to make his exercise program available to the public through the seniors’ health promotion centre that the IUGM is currently developing.

In the three months of the study, senior citizens between the ages of 61 and 89 years participated in group exercises three times a week. Some of the participants were considered frail. All participants were evaluated one week before the start of the program and at the end of the program for physical capacity, quality of life and cognitive health. At the end of this period, the benefits were equivalent among frail and non-frail participants suggesting that it is never too late to engage in exercise intervention programs. This was found in comparison to a control group that did not follow the exercise program.


- More about the University of Montreal at: www.nouvelles.umontreal.ca