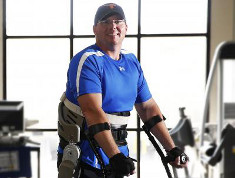 Brian Shaffer, who is paralyzed from the waist
down, has been helping Vanderbilt's engineers
test and improve their exoskeleton design;
© Vanderbilt University/Joe Howell

A team of engineers at Vanderbilt University's Center for Intelligent Mechatronics has developed a powered exoskeleton that enables people with severe spinal cord injuries to stand, walk, sit and climb stairs.

Until recently "wearable robots" were the stuff of science fiction. In the last 10 years, however, advances in robotics, microelectronics, battery and electric motor technologies advanced to the point where it has become practical to develop exoskeletons to aid people with disabilities.

These devices act like an external skeleton. They strap in tightly around the torso. Rigid supports are strapped to the legs and extend from the hip to the knee and from the knee to the foot. The hip and knee joints are driven by computer-controlled electric motors powered by advanced batteries. Patients use the powered apparatus with walkers or forearm crutches to maintain their balance.

"My kids have started calling me 'Ironman,'" said Brian Shaffer, who was completely paralyzed from the waist down in an automobile accident. He has been testing the Vanderbilt apparatus at the Nashville-area satellite facility of the Shepherd Center. Based in Atlanta, Shepherd Center is one the leading hospitals for spinal cord and brain injury rehabilitation in the United States and has provided the Vanderbilt engineers with the clinical feedback they need to develop the device.

"It's unbelievable to stand up again. It takes concentration to use it at first but, once you catch on, it's not that hard: The device does all the work. I don't expect that it will completely replace the wheelchair, but there are some situations, like walking your daughter down the aisle at her wedding or sitting in the bleachers watching your son play football, where it will be priceless," said Shaffer, who has two sons and two daughters.

"This is an extremely exciting new technology," said Clare Hartigan, a physical therapist at Shepherd Center. "All models get people up and walking, which is fantastic." According to Hartigan, just getting people out of their wheelchairs and getting their bodies upright regularly can pay major health dividends. People who must rely on a wheelchair to move around can develop serious problems with their urinary, respiratory, cardiovascular and digestive systems, as well as getting osteoporosis, pressure sores, blood clots and other afflictions associated with lack of mobility. The risk for developing these conditions can be reduced considerably by regularly standing, moving and exercising their lower limbs.

The Vanderbilt design has some unique characteristics that have led Hartigan and her colleagues at Shepherd Center to conclude that it has the most promise as a rehabilitative and home device.

According to the National Spinal Cord Injury Statistical Center, somewhere between 236,000 to 327,000 people in the United States are living with serious spinal cord injuries. About 155,000 have paraplegia. The average age at injury is 41 and the estimated lifetime cost when it happens to a person of 50 ranges from 1.1 million to 2.5 million US-dollars.


- More about Vanderbilt Univeristy at: www.eploration.vanderbilt.edu