Exoskeleton for children: designed to grow as child grows 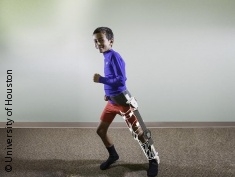 A child models an early-version prototype exoskeleton built with a 3-D printer, overlaid with blueprints at various design stages; © University of Houston

A University of Houston engineer has received funding to create a pediatric exoskeleton, designed to help children with spinal cord injuries and other mobility disorders walk.

The exoskeletons will be customized and designed to grow as the child grows, said Jose Luis Contreras-Vidal, Hugh Roy and Lillie Cranz Cullen Distinguished Professor of electrical and computer engineering.

Contreras-Vidal develops algorithms that read electrical activity in the brain and translate it into movement, using a subject's thoughts about movement to power robotic exoskeletons, bionic hands and other assistive devices. This brain-machine interface works by collecting information through sensors attached to the outside of the scalp, rather than requiring they be surgically implanted.

He has worked extensively with adults, helping people with paralysis or other physical impairments stand up and walk in robotic exoskeletons. One of his systems is in clinical trials.

But children pose special challenges, and simply shrinking an adult exoskeleton will not work. Currently, there are no pediatric exoskeletons that allow children to walk independently.

An exoskeleton for kids has to be sturdy but lightweight - researchers plan to use a carbon-fiber composite - and highly maneuverable, compared with the slower and heavier devices used for adults. But it also has to be fun.

"Children are playful," Contreras-Vidal said, and the exoskeleton needs to help them interact with other children, rather than serving to set them apart. "We don't want this to be a barrier. We want it to be a tool for the child."

Work already has been underway in Contreras-Vidal's Laboratory for Noninvasive Brain-Machine Interface Systems. Researchers started with a 3D printer to inexpensively produce a series of prototypes as they considered how each piece would fit the child, how it could be expanded as the child grew and what it would require to allow the most natural movements.

"We were able to print until we got it right," he said. Children with spinal cord injuries face some issues adults do not, including the risk of skeletal deformities caused by still-growing bones in an immobile body. Contreras-Vidal said that is both a complication and an opportunity, because being upright and regaining mobility could ease some conditions.

He hopes to begin testing the devices with children next year, leading to clinical trials and commercial production. He is applying to federal agencies to support advanced development and clinical trials.

His exoskeleton work with adults has relied heavily on the brain-machine interface, or BMI, allowing the user to determine movements simply by thinking. But the first pediatric exoskeletons will likely use sensors; later versions may use a myoelectric system that depends on residual muscle activity.

Contreras-Vidal said the possibilities are limited only by the researchers' imaginations. "The tools for developing a technology are no longer the bottleneck," he said. "It's creativity."

More about the pediatric exoskeleton at: www.uh.edu