Exploring new paths for the treatment of multiple sclerosis 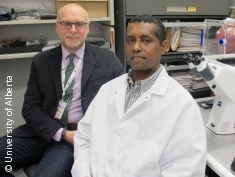 Research from the University of Alberta's Faculty of Medicine & Dentistry is trailblazing a potential new pathway for the treatment of multiple sclerosis (MS). The research, published in the Journal of Neuroinflammation, examines a novel therapeutic strategy to reduce inflammation in the brain – a key contributing factor to the muscle disability associated with multiple sclerosis.

Cytotoxic cells are typically used by the body to kill virus infected cells. In the case of MS though, they are redirected against the host. The enzyme, granzyme B, acts as a weapon, damaging nerve cells and other components in the brain. In the study, researchers found that by suppressing granzyme B through a recently discovered inhibitor called serpina3n, they could significantly reduce the progression of MS symptoms in both human cells and pre-clinical models.

"We can interfere with some of the weapons these cytotoxic cells use to induce damage to the nerve cells in the brain, but without disrupting the other positive functions that these cells have," explains Fabrizio Giuliani, senior author of the study and an associate professor in the neurology division of the University of Alberta's Faculty of Medicine & Dentistry. "This molecule, serpina3n, will block the damage caused by granzyme B that induces the neurodegeneration in this disease, and the neurodegeneration strongly correlates with the disability."

According to Giuliani, by targeting granzyme B, the body's inflammatory response is minimally impacted. He adds that by interfering with the early stages of inflammation to the brain in MS patients, progression of the disease can be slowed.

"In our models, we haven't seen that the disease disappears. The disease is still there, the inflammation is still there, but there's not as much damage in the nerve cells that would induce a permanent disability," says Giuliani.

"The results of this study are very exciting and quite unexpected," says Bleackley. "They are a great example of how basic research can have surprising and beneficial applications in the treatment of human diseases."

Bleackley and Giuliani are already looking to next steps in their research. They are currently preparing experiments using human analogues of serpina3n that will further examine the impact of inhibiting granzyme B in patients with multiple sclerosis.

"The importance of this is that you can see where it's leading. You can see almost an immediate target," says Giuliani. "This could eventually open the door to a new stream of treatments. If we can induce neuroprotection, there is a good possibility we can decrease the rate of disability that is associated with inflammation in the brain. If it works as we think, this will make an impact on the treatment of MS patients."

Mehr about the University of Alberta Faculty of Medicine & Dentistry at: www.med.ualberta.ca