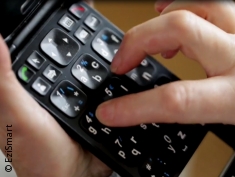 Many elderly people and those with motor function disabilities have problems using a smartphone. This inspired inventor Richard Chan to develop EziSmart; © EziSmart

The elderly may find that using a smartphone is difficult and incomprehensible, while people with disabilities may encounter problems because phone operation requires delicate motor functions. But one inventor saw no reason for it to be this way – and has found a solution to the problem. His invention is a smartphone case equipped with physical buttons, as well as an app that offers an emergency help function. The application can be installed on most Android devices.

Because the buttons are ergonomically designed in a concaved shape, they are easier to press even for those who may have trembling hands. And the alarm function provides a greater level of security for all those who don't have a security alarm. It automatically sends an SMS with a GPS location to the owner's next of kin. If the next of kin don't respond, a manned emergency helpdesk is contacted automatically.

The inventor Richard Chan is now getting assistance from SINTEF researchers to test and further develop the technology.

"I got the idea when my elderly mother back in England suffered a series of serious strokes", says Richard, who currently lives in Norway. "It was expensive to call, and her disability made it impossible for her to communicate using Skype, even though she had all her faculties", he says.

Later, after his mother had lain helpless on the floor for five hours having suffered a fall, Richard, who is trained as a telecommunications engineer, began racking his brains in search of a solution. He started to design the invention that has since been given the name EziSmart. Sadly, his mother has now passed away, but the product she inspired is now seeing light of day. After many years of development, Richard has now produced a finished prototype in line with universal design requirements.

"Of course I was excited to see if the product would be accepted by potential users", he says. "So when I got to know a man who has Parkinson's syndrome, and who suffers from intense shaking and stiffness, I let him have a go with the case. After only two minutes he could call and compose messages – something which previously had been impossible for him with the touch screen", says Richard.

So this summer Richard approached SINTEF in order to take his invention that extra step further. "This was an idea that grabbed our attention at once", says researcher and Project Manager Hanne Opsahl Austad at SINTEF ICT. "We all know that smartphones make communication with the outside world very easy, and that this enhances our quality of life. This is especially true for people who can't get out as much as others. So the EziSmart idea is what we call welfare technology", she says.

As a result, SINTEF, in consultation with the inventor, took on the job of applying for research funds via the Norwegian Regional Research Fund system. And they got a positive response.

The smartphone case will now undergo a series of user tests organized by SINTEF. An important part of the testing regime will be carried out by a panel made up of elderly people. The aim of the study is to gather experience about how EziSmart can assist elderly people living at home in their transition to using smartphones. The studies will test both the smartphone case and the applications that come with it.

"An evaluation will also be made as to whether this total system, including the applications, provides the elderly and their next of kin with a greater sense of security. It's important for us to recruit people who haven't used a smartphone before", explains Austad.

The researchers will also be looking into the problems that the elderly and disabled encounter with today's smartphones, and assessing current systems available to these groups. There already exist specially-developed smartphones for the elderly and phones that employ adapted operative systems. "In contrast to these, the new system will be compatible with many different types of phones, giving the elderly the same freedom of choice as everyone else when it comes to choosing a phone", says Austad.

The panel will then test the system for a given period, and carry out specified tasks such as sending an SMS, taking a picture and sending it as an MMS, and going online to obtain information about a given topic. The members of the panel will be issued with a twin SIM card, so that they can keep their old telephone while testing the new system.

"Of course, those who complete the tests and the subsequent interviews will keep their EziSmart case and the phone after the test period", says Austad, who hopes that the product will be on the market in just over a year – provided the product is approved by the target group.