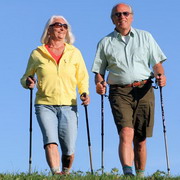 Yale School of Medicine researchers have found that the likelihood of becoming disabled with age increases with the following factors: having a chronic condition or cognitive impairment, low physical activity or slower gross motor coordination.

With age, many people can no longer walk short distances or drive a car, and those with long-term loss of mobility have difficulty regaining independence.

"Losing the ability to walk independently not only leads to a poorer overall quality of life, but prolonged disability leads to higher rates of illness, death, depression and social isolation," said Thomas Gill, who followed a group of 641 people aged 70 or older who could walk a quarter mile unassisted or who were active drivers at the start of the study. All participants could perform essential activities of daily living, such as bathing and dressing.

Gill and his team assessed the participants for changes in potential disability risk factors every 18 months between 1998 and 2008. They also assessed the participants' mobility each month. Those who said they needed help from another person to walk a quarter mile were considered to be walking disabled. Those who said that they had not driven a car during the past month were considered driving disabled.

On a monthly basis, the research team also assessed the participants' exposure to potential causes of disability, including illnesses or injuries leading to hospitalisation and restricted activity, which increased the likelihood of long-term disability by 6-fold.

The team found that multiple risk factors, together with subsequent illness and injury leading to hospitalisation and restricted activity, are associated with an increased likelihood of developing long-term walking and driving disability. The team considered a disability to be long term if it persisted for at least six months.

"We have learned that targeted strategies are needed to prevent disability among older people living independently in the community," said Gill.


- More about the Yale University at: www.yale.edu