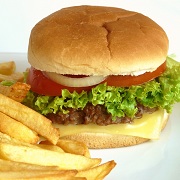 Researchers have examined the eating habits of residents in Singapore and found new evidence that a diet heavy in fast food increases the risk of developing Type 2 diabetes and coronary heart disease.

The latest research by University of Minnesota School of Public Health found that people who consume fast food even once a week increase their risk of dying from coronary heart disease by 20 per cent in comparison to people who avoid fast food. For people eating fast food two-three times each week, the risk increases by 50 per cent, and the risk climbs to nearly 80 per cent for people who consume fast food items four or more times each week. Eating fast food two or more times a week was also found to increase the risk of developing Type 2 diabetes by 27 per cent.

According to University of Minnesota researchers, the few existing studies on the association of fast food and metabolic risk have looked almost exclusively at Western-Caucasian populations from the United States.

"We wanted to examine the association of Western-style fast food with cardio-metabolic risk in a Chinese population in Southeast Asia that has become a hotbed for diabetes and heart disease," said the study's lead researcher, University of Minnesota post-doctoral researcher Andrew Odegaard. "What we found was a dramatic public health impact by fast food, a product that is primarily a Western import into a completely new market."

To arrive at their results, School of Public Health researchers worked alongside researchers from the National University of Singapore. Together, they examined results of a study conducted over a period of 16 years beginning in 1993, which looked at the eating habits of 52,000 Chinese residents of Singapore who have experienced a recent and sudden transition from traditional foods to Western-style fast food.

"What's interesting about the results is that study participants who reported eating fast food most frequently were younger, better educated, smoked less and were more likely to be physically active," said Odegaard. "This profile is normally associated with lower cardio-metabolic risk."

According to the study's senior researcher, Mark Pereira, of the School of Public Health's Division of Epidemiology and Community Health, the new research provides an important perspective on global health and the nutrition transfer when cultures developing in different parts of the world start moving away from their traditional diet and mode of exercise.

"The big picture is that this [fast food] aspect of globalization and exportation of U.S. and Western culture might not be the best thing to spread to cultures around the world," he said. "Global public health efforts should focus on maintaining the positive aspects of traditional cultures, while preventing the spread of outside influences thought to be harmful based on the scientific evidence."


- More about the University of Minnesota Academic Health Center at: www.ahc.umn.edu