First GPS for the Blind 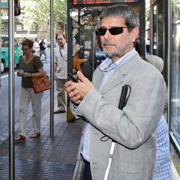 The application can be used by
everyone, including people with
visual impairments; © UAB

A new application for devices with Android operating systems, called OnTheBus, helps people find their way and move around in large cities. The application is useful especially for people with visual, hearing or cognitive impairments.

The application, already available at Google Play, offers a set of optimal routes users can choose from. Once one of the routes is chosen, the application guides users from where they are located to the nearest bus stop and informs them of the time remaining until their bus arrives. Inside the bus, the application informs on the number of stops and signals the user when it is time to press the button and get off the bus. It then guides users to their destination. The system uses the newest technologies available for mobile devices such as GPS, compass, accelerometer, voice recognition and generation, and 3G or WiFi connection.

Currently, it can be used in Barcelona, Madrid and Rome, and will soon be available for the cities of Valencia, Zaragoza and Helsinki. The application is offered in Spanish, Catalan, English and Italian. New versions in other languages and for other cities are also being prepared.

Researchers are already working on improving the application by including other public transport means and more basic services such as finding taxis, the nearest chemist's or assistance centres, using augmented reality techniques to locate stop signs and public transport stops, as well as the integration of social networks.


- More about the Universitat Autònoma de Barcelona (UAB) at: www.uab.es