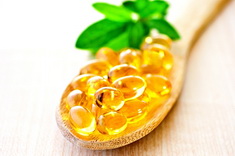 Addimg fish oil to one's daily diet can have a
positive effect on the healing of bedsores;
© Gita Kulinica/panthermedia.net

Chock-full of Omega-3 fatty acids and antioxidants, fish oil can help lower blood pressure, reduce inflammation in the skin and joints, and promote healthy fetal development. Now a Tel Aviv University researcher has found that it has a positive effect on bedsores, too.

A common problem in critically ill patients, bedsores result from constant pressure on the skin and underlying tissue due to prolonged sitting or lying down. Painful and prone to infection, the pressure ulcers need to be healed, says Pierre Singer of the Sackler Faculty of Medicine. With Miriam Theilla at the Rabin Medical Center, he designed a randomized experiment to determine the impact of dietary fish oil supplements on the bedsores of critically ill patients.

After a three week period of adding eight grams of fish oil to their patients' daily diet, the researchers found not only a significant lessening of pain and discomfort from bedsores – a 20 to 25 percent improvement, according to the Pressure Ulcer Scale for Healing – but also a more efficient immune system and a reduction to inflammation throughout the body.

Inspired by the results of a previous study showing that dietary fish oil supplements for critically ill patients raised oxygen levels in body tissues, Singer and his fellow researchers sought to determine whether the supplement could also help heal bedsores, which are also formed by a lack of oxygen, reduced blood flow, and skin wetness.

To test this theory, the researchers developed a randomized study with 40 critically ill patients. Half the patients were given standard hospital diets, and the rest had a daily addition of eight grams of fish oil added in their food. After a three-week period, the patients in the fish oil group had an average of 20 to 25 percent improvement in the healing of their bedsores compared to the control group.

Beyond the size of the bedsores, the researchers also measured different immune parameters and found that the patients in the fish oil group had experienced a boost in their immune system and a reduction in swelling. "We saw a modification in the expression of a group of molecules associated with directing leukocytes, or white blood cells, in the direction of the wound, which could explain the improved healing," explains Singer.

In addition, researchers noted a significant decrease in the amount of C-reactive protein in the blood, which is associated with inflammation and linked to viral and bacterial infections, rheumatic diseases, tissue injury, and necrosis.

Next, Singer and his fellow researchers plan to explore the use of fish oil as a method of natural pain management. By measuring the intensity of pain experience in post-surgical patients who have undergone either knee or hip replacements and comparing it to the amount of fish oil the patient has received, they hope to determine whether the nutrient-rich oil can also reduce their patients' suffering.


- More about the American Friends of Tel Aviv University at: www.aftau.org