Fit elderly fall as much as their couch-potato peers 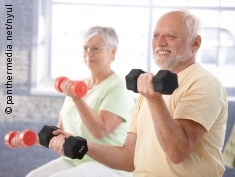 There is no relationship between how many hours participants exercised and how well they did on the four balance tasks; © panthermedia.net/nyul

It's not enough to stay fit as you age if you want to avoid falls, researchers from the Norwegian University of Science and Technology have found. When they looked at how many hours older people exercised and how well they performed on four balance tests, they found no relationship. Even if older people are active, they need to work specifically on their balance to reduce their risk of falling, according to new research from the Norwegian University of Science and Technology's Department of Psychology.

Every year around 30 per cent of all people aged 65 and older experience a fall. In the same age group, falls account for 40 per cent of all injury-related deaths worldwide. Injuries from falls can have serious consequences. One in four seniors who break their hip die within a year, and quality of life can be greatly reduced for survivors. So for her master's research, Annelise Dyrli set out to study how people can most effectively reduce their risk of falling.
Dyrli tested 41 people aged 65 to 88 in her study. These seniors were generally much fitter than average, with varied backgrounds such as gymnastics and hiking and ski touring.

Study participants had to try four different balance exercises. They also went through the Berg Balance Scale (BBS), which is a widely-used set of functional balance tests. The BBS is typically used after a person has experienced a fall. The Berg Balance Scale also tries to predict one’s future level of risk of falling.

Across the board, Dyrli’s group of elderly participants was generally in very good shape, and a very diligent and conscientious group. But Dyrli found no relationship between how many hours participants exercised and how well they did on the four balance tasks – even though those who exercised the most did very well on the BBS.

That is, the fittest did not perform any better than other study participants on a task where they walked along a line, touching heel to toe with each step, or when they walked figure eights, stood on one leg with their eyes closed, or stood as long as possible on a balance board.

As we age, most of us will have poorer balance. There is no single reason for this, but weakening eyesight and muscles, and physical changes in the brain, all play a role. But poor balance can also be related to other factors, such as medications prescribed to the elderly that can make them dizzy. The fear of falling in and of itself may also increase the risk. Unfortunately, our bone structure also becomes more porous as we grow older. So, a fall can have much greater consequences for the elderly than for younger people.

Exercise can give us better balance. But Dyrli’s study shows that the kind of exercise that you do matters. Dyrli’s research results confirm learning theory research, called the Specificity Principle. In simple terms, this means that you have to work specifically at the skill you want to get good at.

A few years ago, Dyrli’s supervising professor, Hermundur Sigmundsson, led a study that showed just this, and how specific your practicing needs to be improve a skill. The researchers looked at mathematics as an example and showed that you are not necessarily good at geometry even if you are good at algebra, or vice versa.

You need to perform the specific exercise or skill that you want to get good at, whether it’s putting in a free kick from 25 metres in football, mental arithmetic or in this case, balance. It doesn’t help if you’re fit enough to climb up mountains if you are unable to stand on one leg when you’re putting on your socks.

Naturally this does not mean that there is no advantage to being in good shape if you fall. Maybe you’ll recover and be back in the swing of things more quickly after a fall. But Dyrli has not investigated this yet.

She believes it would be important to find out more about what kind of exercise older people do, and to explore individual differences. This information could be useful for developing new balance tests, but also for figuring out the kind of training that can make us steadier on our feet.

One problem is that no standardized measures currently exist for this group. The Berg Balance Scale may be a useful predictor of falls for frail older people, but so far we know little about how to prevent falls and declining balance in those who are physically active.

REHACARE.com; Source: The Norwegian University of Science and Technology (NTNU)

More about The Norwegian University of Science and Technology at: www.ntnu.edu