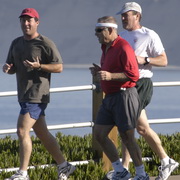 A 55-year-old who can run a mile
in eight minutes has a lifetime risk
of developing heart disease of less
than ten percent; © gizadog/SXC

How fast can you run a mile? If you're middle-aged, the answer could provide a strong predictor of your risk of heart attack or stroke over the next decade or more.

In two separate studies, University of Texas (UT) Southwestern Medical Center researchers have found that how fast a middle-age person can run a mile can help predict the risk of dying of heart attack or stroke decades later for men and could be an early indicator of cardiovascular disease for women.

Researchers analysed the heart disease risk of 45-, 55- and 65-year-old men based on their fitness level and traditional risk factors, such as age, systolic blood pressure, diabetes, total cholesterol and smoking habits. The scientists found that low levels of midlife fitness are associated with marked differences in the lifetime risk for cardiovascular disease.

"Heart disease tends to cluster at older ages, but if you want to prevent it, our research suggests that the prescription for prevention needs to occur earlier – when a person is in his 40s and 50s," said Jarett Berry, assistant professor of internal medicine and a corresponding author on both studies. Researchers in this study found that a higher fitness level lowered the lifetime risk of heart disease even in people with other risk factors.

In a separate study in Circulation, UT Southwestern researchers found that the same treadmill test predicts how likely a person is to die of heart disease or stroke more accurately than assessing the risk using only typical prediction tools such as blood pressure and cholesterol levels.

"Nearly all women under 50 years of age are at low risk for heart disease," Berry said. "However, as women get older, their risk increases dramatically. In our study, we found that low levels of fitness were particularly helpful in identifying women at risk for heart disease over the long term."

For decades, scientists have tried to improve their ability to determine which patients are at highest cardiovascular disease risk. Blood-based and imaging techniques have been used to try to improve risk prediction, but fitness has not been examined until now, Berry said.

For both studies, researchers collected information from thousands of participants who underwent a comprehensive clinical exam and a treadmill exercise test at the Cooper Clinic in Dallas between 1970 and 2006.


- More about the University of Texas Southwestern Medical Center at www.swmed.edu