Frail, Older Adults Are More Likely to Be Food Insufficient 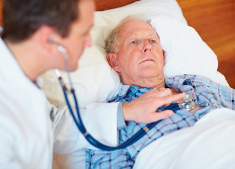 A national study of older Americans shows those who have limited mobility and low physical activity – scientifically categorized as "frail" – are five times more likely to report that they often don't have enough to eat, defined as "food insufficiency," than older adults who were not frail.

The nationally representative study of more than 4,700 adults older than age 60 in the United States uses data from the Third National Health and Nutrition Examination Survey.

Lead author Ellen Smit said food insufficiency occurs when people report that they sometimes or often do not have enough food to eat. Food-insufficient older adults have been shown to have poor dietary intake, nutritional status and health status.

Frailty is a state of decreased physical functioning and a significant complication of aging that increases the risk for incident falls, fractures, disability, health care expenditures, and premature mortality. People in this study are diagnosed as frail when they meet two of the following criteria: slow walking, muscular weakness, exhaustion and low physical activity.

Smit said as the population ages, with more than 20 percent of Americans expected to be older than 65 by 2030, the need for identifying clinical and population-based strategies to decrease the prevalence and consequences of frailty are needed. In her study, almost 50 percent of people were either frail, or "pre-frail," meaning that they were at risk for decreased physical functioning.

"We need to target interventions on promoting availability and access to nutritious foods among frail older adults," Smit said. "It is also important to improve nutritional status while not necessarily increasing body weight."

Frail adults may have difficulty leaving the house, for instance, and accessing fresh fruits and vegetables. Smit said communities could work on identifying programs or nonprofit organizations that can deliver nutritious meals or fresh produce to older frail adults.