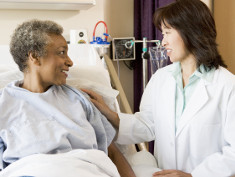 Geriatric care after an accident may have positive impact on how fast the older patient becomes independent again; © Monkeybusiness Images/
panthermedia.net

Older patients who received extra geriatric care following a traumatic injury were able to return to roughly two thirds more daily activities than those without a consultation, according to a new study led by researchers from the University of Michigan Health System and University of California, Los Angeles.

Patients in the study were 65 or over and had experienced injuries ranging from a minor rib fracture from a bad fall to a serious head injury or multiple fractures as a driver, passenger, or pedestrian in a motor vehicle accident.

A year after discharge from the hospital, patients were questioned about how well they were able to return to independence in regular activities, including walking, bathing, managing finances, light housework and simple shopping trips.

Those who saw an additional geriatrician during their hospital stay were less dependent on others a year later – most notably in their ability to leave the house to shop for personal items – according to the research.

"Trauma surgeons have long struggled with the fragility of their older trauma patients who have much greater health risks for the same injuries experienced by younger patients," says senior author Lillian Min, assistant professor of internal medicine, Division of Geriatric Medicine at the U-M Medical School. "We've come a long way in improving our survival rates of these patients but what we didn't know was whether we were returning them to their homes and communities sicker than they were before."

"What we found was that geriatric interventions helped older patients take better care of themselves and be more independent."

Adults aged 65 and over are estimated to comprise 40 percent of all trauma patients over the next four decades.

The study found that overall, senior patients who had been hospitalized for a trauma injury were not able to return to all of the daily tasks they had been doing before. Most of the new impairments were in shopping for personal items, which is the one activity performed out of the home. Authors say this difficulty may reflect fatigue, physical disability, or fear of going out.

Participants who received the geriatric consult had access to geriatricians who were able to discontinue unnecessary medications, avoid medications that older patients are sensitive to, promote physical rehabilitation, prevent delirium, and pay attention to home situations such as where patients lived and who their caretakers were.

"This information compels us to do more to help our older patients get back to normal life," Min says. "Our findings suggest that even small changes in care can lead to decreased complications and improve health outcomes for a vulnerable group. We have a responsibility to do what we can to strengthen collaborations between surgery and geriatric medicine doctors."

Min and her colleagues started the two-and-a-half-year study at UCLA in 2007 to explore how much disability persists as long as one year after discharge. A similar study is underway at the University of Michigan.

More about the University of Michigan Health System at: www.med.umich.edu