Girls and boys with autism differ in behavior and brain structure 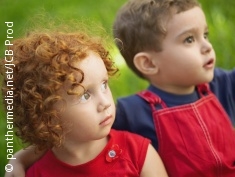 A new study shows that there are gender differences in the behaviors displayed by children with autism; © panthermedia.net/JCB Prod

Girls with autism display less repetitive and restricted behavior than boys do, according to a study by researchers at the Stanford University School of Medicine.

The study also found that brain differences between boys and girls with autism help explain this discrepancy.

The study gives the best evidence to date that boys and girls exhibit the autism spectrum disorder (ASD) differently.

"We wanted to know which specific clinical manifestations of autism show significant gender differences, and whether patterns in the brain's gray matter could explain behavioral differences," said the study's senior author, Dr. Vinod Menon, professor of psychiatry and behavioral sciences. Knowledge of the difference could help clinicians better recognize and treat autism in both sexes, he added. "Understanding this is really quite crucial clinically."

Among children diagnosed with the high-functioning form of autism, boys outnumber girls by four to one. Scientists were interested in comparing the expression of core features of the disorder between sexes because they have long suspected girls with autism may display symptoms differently, causing them to be underdiagnosed or making it harder for them to get the most appropriate treatment.

"Autism has primarily been studied from the viewpoint of boys with the disorder," said Menon, who holds the Rachael L. and Walter F. Nichols, MD, Professorship. "Understanding gender differences can help in identifying the behavioral skills that are most important to remediate in girls vis-a-vis boys."

The study examined the severity of autism symptoms in 128 girls and 614 boys registered with the National Database for Autism Research. The children ranged in age from 7 to 13, had IQ scores above 70, and had been evaluated with standard tests for autistic behavior. The boys and girls were matched for age, and had the same average IQ. Girls and boys had similar scores for social behavior and communication. But girls had lower (more normal) scores on a standard measurement of repetitive and restricted behaviors.

The researchers then examined data from the Autism Brain Imaging Data Exchange that included structural MRI brain scans of 25 boys with autism, 25 girls with autism, 19 typically developing boys and 19 typically developing girls. The individuals among the groups were matched for age and IQ. The researchers again found that girls and boys did not differ on social behavior and communication skills, but that girls had less-severe repetitive and restricted behaviors. "This replication provides the strongest evidence to date for gender differences in a core phenotypic feature of autism," Menon said.

The brain-scan analysis revealed several gender differences in brain structure between typically developing boys and girls, consistent with the findings of earlier studies.

Children with autism, however, had a dissimilar set of gender differences in their brains - specifically, in the motor cortex, supplementary motor area and a portion of the cerebellum. These regions affect motor function and planning of motor activity. The researchers noted that many repetitive behaviors, such as hand-flapping, have a motor component. The study demonstrated that patterns of gray matter in these motor regions could accurately distinguish girls from boys with autism, Supekar said. The researchers found that parts of the motor system that contributed to individual scores for repetitive and restricted behaviors were different in boys and girls.

"Girls and boys with autism differ in their clinical and neurobiological characteristics, and their brains are patterned in ways that contribute differently to behavioral impairments," Menon said.

"The discovery of gender differences in both behavioral and brain measures suggests that clinicians may want to focus diagnosis and treatments for autistic girls differently than boys," Supekar added.

More about the Stanford University Medical Center at: www.med.stanford.edu