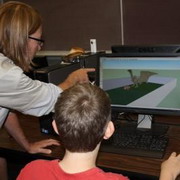 Google and the University of Utah
have teamed to provide workshops
for kids with autism; © University
of Utah

Researchers at the University of Utah have created a program that helps kids with autism focus on building their skills and utilising an aptitude for visual-spatial thinking, computers and other electronic media.

One of the program participants is 12-year-old Christopher Charles, who was diagnosed with what's now known as high-functioning autism when he was 18 months old. His parents started him in therapies early on, but had not found something that seemed to hold Christopher's interest or accommodate his behaviours.

Chris has participated for the past year and a half in workshops at the University of Utah to teach 3D modelling software by Google called SketchUp. Doctor Cheryl Wright coordinated the workshops in partnership with Google's Project Spectrum, an initiative to teach job skills to kids with autism. Steve Gross, a certified SketchUp instructor and designer for Universal Creative theme parks, leads the workshops.

Wright and her team soon found far greater benefits to these workshops than acquiring a skill set for potential employment, however. The sessions facilitated social engagement among the students and their peers, parents, siblings and even grandparents.

The study focuses on the effects of the workshops on individual students involved as well as on multiple generations within their families — an uncommon opportunity in the research on social interactions of people with autism spectrum disorders (ASD).

After just weeks in the workshops, Christopher's parents noticed a big difference. "Christopher spends hours on his design projects," says his father Nik. "There are few activities that have been able to hold Christopher's attention like SketchUp." In fact, Christopher once noted that he wouldn't miss the SketchUp sessions "even if aliens invaded the Earth."

Each session was two hours long and included hands-on training in the use of the design program as well as time for students to share their design projects. At the end of six weeks, the participants, all boys, presented their designs to classmates at their schools and at community events.

Chris' mother Kay notes, "Chris was always off-task, but it is been amazing to see him develop the ability to stay on task for something, even with different groups of kids, not just in the SketchUp workshops. He is now very comfortable in front of a group of people, and he even will wait his turn to answer questions if he is with other presenters."

The parents of the workshop participants mentioned a greater ability to connect with their child with ASD. As Chris's father noted, new conversations were sparked in speaking about what they learned and in sharing their designs.