Grandmothers Who Raise their Grandkids Struggle with Depression 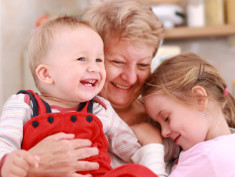 Carol Musil, professor of nursing, recently conducted one the longest-running studies on grandmothers in various family situations, from serving as their grandkids' fulltime caregivers to those not caring for their grandchildren as a comparison.

"Although we expected the primary caregiver grandmothers raising grandchildren would have more strain and depressive symptoms," Musil said, "we were surprised at how persistent these were over the years examined in the study."

Some 6.2 million, or 5.3 percent of all U.S. households, have a grandparent living in the house, according to U.S. Census data. Musil said over 1 million grandmothers are responsible for raising grandchildren whose parents do not live in the home.

Musil tracked and focused on the health and wellbeing of 240 grandmothers they studied for 6 ½ years to see how the responsibilities of caring for their grandchildren 16 years and younger affected their health over time.

The subjects were surveyed about their physical and mental health annually for the first three years, and two more times, 2 to 2 ½ years apart at the end of study.

The grandmothers, who averaged 57.5 years old at study onset, were in three caregiving situations: those who are fulltime caregivers for their grandchildren, living in multigenerational homes or non-caregivers. They were randomly selected throughout Ohio, representing rural, suburban and urban backgrounds.

Despite the signs of depression and family stress, researchers also found that the grandmothers, especially those raising grandchildren, were generally open to receiving various forms of help. That implies, Musil said, that grandmothers might be open to resourcefulness training, which has helped to reduce depressive symptoms in grandmothers in pilot studies conducted with Jaclene Zauszniewski.

"They need support from others," she said, "but the most important thing is to maintain and perhaps develop new cognitive and behavioral skills and approaches for handling some very challenging family issues."

More about the Case Western Reserve University at: www.case.edu