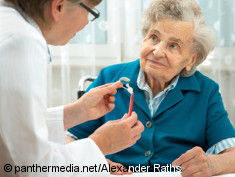 Now, a University of Missouri researcher has developed an intervention that helps older adults gradually increase their hearing-aid use and satisfaction with the devices.

When individuals wear their hearing aids for the first time, they are flooded with sounds they have not heard in months or years; yet, previous research has shown that not all new sounds are welcomed. Ambient noises such as air conditioners, wind and background conversations can be painful, irritating and difficult to ignore, causing some individuals to stop using their hearing aids right away.

"Hearing loss is a common health problem facing many aging adults that can have serious effects on their quality of life, including heightened chances of depression and dementia," said Kari Lane, assistant professor of nursing at the MU Sinclair School of Nursing. "Hearing aids are not an easy fix to hearing loss. Unlike glasses, which provide instant results, it takes more time for the brains of hearing-aid users to fully adjust to the aids and new sounds they could not hear before."

"It is common practice for audiologists to have their patients wear hearing aids all day when they first buy them, but not all persons are able to do this comfortably," Lane said. "Prior research shows there is a need for alternative ways to teach people how to use hearing aids like the HEAR intervention, which allows hearing-aid users to gradually adjust to using the aids while receiving support and coaching from health professionals and family members."

Lane encourages all health care providers to give patients anticipatory guidance on the likely upcoming health events aging adults may experience, such as hearing loss. Lane said preparing patients earlier could reduce some of the negative social stigmas associated with hearing aids and educate patients about the negative effects hearing loss can have on their health and quality of life.

"If health care professionals begin discussing hearing loss with their patients sooner, before problems arise, the use of hearing aids could be normalized, and individuals would be better prepared for the transition when it is time for them to begin use," Lane said.