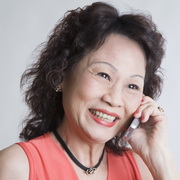 The screening test is made via
telephone; © panthermedia.net/
JCB Prod

The University of Southampton has developed a new hearing screening test which could help the estimated 100 million people suffering from hearing loss in China.

This new Chinese version is based on a hearing screening test developed by the University's Institute of Sound and Vibration Research (ISVR), which has already been taken by more than a million people across Europe.

The availability of a telephone-based test enables individuals to obtain an objective assessment of their hearing ability and hence guidance on whether they should seek professional assistance. The tests developed at ISVR are based on listening to triple digit presentations, such as "2-5-9", against a background of noise and then pressing the corresponding numbers on the telephone keypad.

Correct responses lead to the noise level increasing, thereby making the test more difficult, while mistakes lead to the noise level deceasing, making the test easier. The overall test measures the highest noise level that is compatible with correct responses. Performance on the test reflects the main difficulty experienced in everyday life by people with a hearing loss, which is understanding what people are saying in a background of noise.

The test was developed by Mark Lutman and Guoping Li of the ISVR. "This project will have a massive social impact in China. There are at least 100 million adults who are hearing impaired and this is the first adult hearing screening test via telephone made available in China,” says Li.

The original test developed by Lutman in ISVR was in English and was implemented by the Royal National Institute for Deaf people, RNID (now re-named Action on Hearing Loss) in 2005. Subsequent tests were developed in Swiss-German and Welsh.

This most recent test in Mandarin Chinese is sponsored by Beijing Telecom, Huawei and Tongren Hospital. A corresponding test for use over the Internet is also being prepared.


- More about the University of Southampton at: www.soton.ac.uk