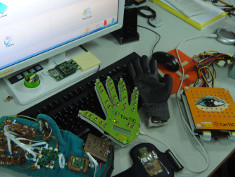 A tactile stimulation system has been implemented on a glove; © RUVID

A team of researchers from the Alcoy campus of the Universitat Politècnica de València has designed a new device to help deafblind people to communicate and surf the Internet. The system called TacTic is currently at prototype stage and is aimed primarily at those who use the Malossi language.

The researchers have devised a tactile stimulation system that has been implemented on a glove and is based on the Malossi language. The glove is provided with 26 motors, each of which represents the letters of the alphabet distributed along the hand, in addition to a keyboard, a charger and different wireless modules.

The system consists of two interfaces, one for computer access and one for smartphones. In both cases, TacTic enables users equipped with the touch glove to surf the web, read books or other text files, check emails, communicate via Messenger and even get a tactile representation of images and music.

The system also features a virtual interpreter that allows any user to communicate with another touch glove wearer, enabling the sending and receiving of messages and a voice recognition module. It also has a support system for emergencies, with the user's geolocation, which can send a warning text message.

In addition, researchers have designed a PC application that reproduces video files (films and TV series) with subtitles, which are sent to the user's touch glove.

This technology could help deafblind people to enhance their relationship with the outside. Until now they can only communicate with people who know the specific language used by people with this disability and have very limited access to web content, points out the researcher Juan Navarro.