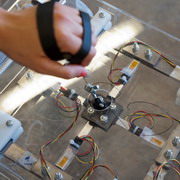 Dino-Might prompts the child to
appropriately adjust his or her
movements; © Jeff Fitlow

With the aid of multiple force sensors and a digital dinosaur, a team of Rice University seniors known as Helping Hands hopes to restore strength and flexibility to the hands and wrists of children with cerebral palsy.

"These kids have a real problem with their hands," said Jenna Desmarais, a senior at Rice majoring in mechanical engineering. "The fingers and wrists are locked into a sort of claw-like position. Even after surgery to correct it, they need physical therapy to get stronger."

The team's rehabilitation device, the Dino-Might, was inspired by their mentor, Gloria Gogola, a pediatric hand and upper-extremity surgeon at Shriners Hospitals for Children in Houston. She corrects the condition, known as spastic wrist flexion deformity, and restores wrist extension by surgically removing a tendon from the underside of the wrist and attaching it to the upper portion.

After surgery, the wrist and its associated muscles and tendons, though straightened, are weak and must be exercised to restore near-normal use. Gogola wanted a rehabilitation device that securely positions the patient's limb, senses and records its strengths and provides a workout for the weakened wrist. Dino-Might prompts the child to appropriately adjust his or her movements with a computer game starring an animated dinosaur.

"It is a game, essentially, but one that is connected to eight strength gauges," said Jessica Joyce, who devised the software for the device. "By playing the game, the child is telling us how strong she is and how well she can use her wrist and hand. With the game as an incentive, we are learning the patient's strong points, keeping a record of them and making them stronger at the same time."

On the display screen, the patient is given an angular route and is asked to follow it as closely as possible. Using a graphical user interface (GUI) and a data acquisition device, the researchers are able to record results of the patient's movements while the results are being displayed in real time.

"There have been similar devices in use, but Gogola has not been satisfied with them," Joyce said. "Something, some feature she wants to use, is always missing. What is novel here is the completeness, all in one package – the force sensors, the arm restraint, the stand, the hand restraint, the GUI."


- More about the Rice University at: www.rice.edu