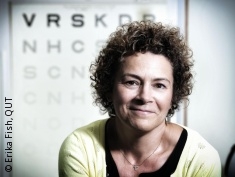 Professor Joanne Wood says: "Driving is probably one of the most important everyday activities for older adults"; © Erika Fish, QUT

One of the world's leading experts on visual impairment, ageing and driving, Queensland University of Technology QUT's Professor Joanne Wood, has won the "Nobel Prize" of international optometry for her work.

The Brisbane-based Australian researcher was presented with the 2015 Glenn A Fry Award by the American Academy of Optometry in New Orleans during the academy's annual meeting this month.

The 45-year-old award has traditionally been the domain of American academics but researchers from QUT's School of Optometry and Vision Science have now claimed a trifecta of trophies in the past six years for their research and advancing optometry.

The honour also went to QUT's Professor Nathan Efron in 2010 (he was only the second person outside of North America to receive it), with QUT's Professor David Atchison claiming the award in 2011.

During this year's event, Professor Wood also presented a lecture on her work which provided a snapshot of her recent vision and driving studies. These included studies on glaucoma and driving and others that have investigated the impact of various visual conditions on night-time driving and visibility.

"This prestigious award is a great personal honour but also reflects the opportunities provided in the School of Optometry and Vision Science at QUT and the wonderful people I have had the opportunity to collaborate with over the years," Professor Wood said.

An international expert in the effects of visual impairment, ageing and driving performance, Professor Wood's research seeks to identify tests that can better predict safe and unsafe driving.

"Our recent research has been focusing on characterising the driving performance of older adults with eye diseases and identifying tests that can best predict driving ability in these individuals and those of the wider old adult population," she said. "We are also interested in looking at ways in which we might improve driving safety for these drivers."

Professor Wood's research career has spanned 30 years – including a Post Doctoral Fellowship in Clinical Psychophysics at Oxford University – and she remains passionate about her research.

"I am committed to better understanding the practical consequences of visual impairment," she said. "Driving is probably one of the most important everyday activities for older adults. It allows people to maintain their independence and has been shown to have a positive effect on quality of life. That is why it's so important that we can assist people to drive safely for as long as possible."

More about the Queensland University of Technology at: www.qut.edu.au