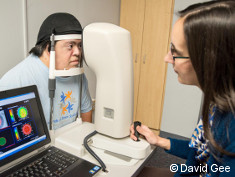 New computer-simulated prescribing strategies for glasses may improve the vision of people with Down syndrome, thanks to a team of University of Houston College of Optometry (UHCO) researchers who received a $1.67 million grant from the National Eye Institute (NEI).

More than 400,000 individuals in the U.S. have Down syndrome. This genetic condition presents challenges that can include poor muscle tone, intellectual disability, developmental delays and visual deficits. Vision problems more common in individuals with Down syndrome are the need for stronger prescriptions, poor focusing abilities to see clearly up close, misalignment of the eyes (often called eye turn or strabismus) and reduced visual acuity even with corrective lenses.

"The motivation for our study is a recent finding that individuals with Down syndrome have increased levels of distortions in the optics of their eyes that we believe leads to poorer visual acuity with current spectacle prescribing methods than the typical patient eye with fewer distortions," said assistant professor Heather Anderson, who is the principal investigator (PI) on the grant. "We hope to demonstrate improved acuity with prescribing strategies that are derived when considering these higher level optical distortions."

To do this, the researchers will compare the performance of clinically derived prescriptions by an experienced clinician to computationally derived prescriptions that take into account the optical distortions of the eye. The study has three phases that will be conducted over the next five years, and the recruitment and testing of study subjects will begin this spring.

Most people are familiar with routine eye examinations, where a clinician will perform a subjective refraction procedure in which a patient is asked to judge two combinations of sphere and cylinder power and select the option that looks the best. This process continues with additional comparisons of two choices, ultimately leading a clinician to identify the combination that provides the best clarity of vision for the patient. While this process works well for the typical patient, it's much more challenging for patients with Down syndrome.

The NEI-funded study proposes new strategies using computer simulations to identify the most effective prescription for patients with Down syndrome by first performing measurements of the optical distortions of their eyes and then allowing computational analysis to test each potential prescription possible. These computational comparisons can be made quickly for thousands of combinations of sphere and cylinder correction outside of the patient's exam, compared to a standard subjective refraction in which only tens of choices may be compared due to the time available during an examination. Their hope is this will result in a prescription that provides the best possible vision improvement.

"We will then dispense spectacles determined both by computational analysis, as well as from examinations by experienced clinicians, to determine whether the computational method can outperform current clinical techniques in both visual acuity achieved and patient preference," Anderson said. "If we find the mathematically derived prescriptions perform better for participants with Down syndrome than those resulting from current clinical techniques, the next step will be to conduct a large-scale, multi-center clinical trial."

Ultimately, Anderson says, these mathematical strategies could be incorporated into the instruments used to measure the optical distortions of the eye, putting this treatment strategy directly in the hands of the clinician. She also notes that other researchers are already working on testing this same concept for individuals who have elevated levels of optical distortions caused by eye diseases, rather than due to Down syndrome. If this approach is successful, she predicts it could shape practice across the board within the next 10 years.

Researching the visual system of individuals with Down syndrome for 10 years, Anderson says there are gaps in understanding the vision of this population. She realized they needed more advocates who could conduct research studies in an attempt to expand upon current clinical practices, leading to improved vision care and maximizing vision, which would have the potential to increase their independence.

More about the University of Houston at: www.uh.edu