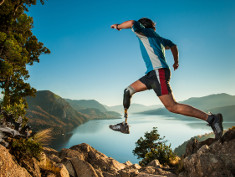 Thanks to advanced technologies, those who wear prosthetic and orthotic devices are now able to break previous activity boundaries. People with amputations now have prosthetic devices that allow them to engage in and function more effectively in a wider range of daily activities, exercise, sports, and even extreme sports, such as long-distance snowshoeing and ice climbing.

According to Highsmith, evidence-based analysis incorporates three elements: patient input, clinical expertise, and best evidence. In papers appearing in this special issue, those analytical elements are included, especially in those studies reporting on extreme recreational pursuits that are evaluated in terms of both human functional performance and innovative technology prosthetic concepts for managing rigorous environments, climates, and terrain.

For example, one study provides details on the design of adjustable ankle units on prosthetic devices that allow the user to adjust the flexion of a prosthetic foot in sub-freezing temperatures quickly, to allow for variable terrain and faster clothing changes. The prosthetic ankle is designed to "tolerate significant abuse, ice, and water."

Another study outlines determinations of energy expenditure measurements during adventure-type activities for those with lower extremity amputations. The study gathers data on energy expenditure through use of a multifunction prosthesis during a snowshoeing trek and vertical ice climbing in an arctic survival course in Denali, AK.

Fitness training for those wearing prostheses is also examined. For instance, the design and performance of a device allowing above-the-elbow amputees to do push-ups during a workout was examined and compared to the pushup performance of a non-amputee. The pushup device was designed by an amputee participant.

Analyses and evaluation of the technical aspects of new prosthetic and orthotic devices for use in performing daily activities also appeared in several studies. For example, one study examined the functional electrical stimulation incorporated into ankle foot orthoses prescribed for children with cerebral palsy to improve their walking quality and ambulatory function. Also, current concepts regarding externally powered lower limb prostheses – particularly those of the ankle with design strategies that include pneumatic and battery-powered systems – are considered in another report.

"The papers in this issue not only include technological prosthetic concepts that are still being refined in the laboratory, but they also pull together literature in an understudied sub-population of persons with lower-limb amputation and those with bilateral transfemoral amputation," noted Highsmith.

For example, persons with transfemoral amputation encounter stairs and ramps. Previous microprocessor knee systems studies have focused on enabling stair descent. One study in this special issue investigates functional aspects of stair climbing, while another addresses short and mid-distance walking speed and compares the Genium microprocessor knee to the C-Leg knee prosthesis, both of which are worn by transfemoral amputees. Several other studies compared the C-Leg knee prosthesis to the Genium knee in terms of function and quality-of-life benefits.

"Speaking" to rehabilitation practitioners, Highsmith concludes his editorial by saying he hopes that readers are "able to utilize the pearls of wisdom found in this special edition of Technology and Innovation to inform your practice and your research in the in the pursuit of improving quality of life."

More about the University of South Florida at: www3.research.usf.edu