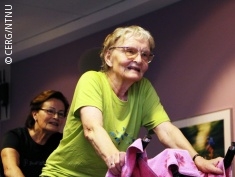 Women who participated in the pilot study had less inflammation, researchers said; © CERG/NTNU

Fingers and toes slowly but surely become stiff and painful. A nice morning stretch is no longer all it takes to get your body moving. Arthritis is a chronic illness that causes inflammation in your joints. Arthritis can destroy your joints, which causes weakness and loss of movement. Patients with arthritis often have reduced endurance, and are at an increased risk of cardiovascular disease.

Arthritis affects about one per cent of the population, and about three times as many women as men. Mostly adults are affected, but the disease can occur in children as well. Treatment helps to ease symptoms, but the disease is chronic.

"This is why it is especially important for arthritis patients to keep fit and work on their cardiovascular endurance," says Anja Bye, a researcher at the K. G. Jebsen Centre for Exercise in Medicine – Cardiac Exercise Research Group (CERG) at The Norwegian University of Science and Technology (NTNU).

Until now, however, there has been little documentation of how exercise actually affects arthritic joints. "Previously, studies have showed that moderate intensity work-out sessions can help improve endurance without inducing pain or inflammation, or damaging joints," says Bye.

She explains that numerous studies show that high-intensity interval training is much more effective for improving endurance than moderate intensity training. "This is true regardless if you’re sick or healthy, young or old. We wanted to see if patients with arthritis could handle high intensity training and see the same positive effects," says Bye.

After ten weeks of hard training on a spinning bike twice a week, Bye saw no adverse effects on her study’s participants, a group of women with arthritis. "Rather, we saw a tendency for there to be less inflammation, at least as measured by the inflammation marker CRP, and the participants of the study experienced a solid increase maximum oxygen intake, meaning that they reduced their risk of cardiovascular disease," Bye said.

The participants also saw a small reduction in BMI, body fat per cent and waist measurement, as well as an increase in muscle mass as a result of the training period.

"The women who participated in the study found this to be a good, effective method of training, and are mostly very motivated to continue because of the progress they’ve seen," Bye says.

The study was a pilot to see if the idea was worth researching in depth, and consequently included only 18 women between the ages of 20 to 49. The study’s small size means it is too early to conclude if recommended training programmes for arthritis patients should be changed, but the study suggests it might be a good idea.

The Department of Rheumatology at St. Olavs Hospital is working on a study of high intensity training for different patient groups in cooperation with CERG.

REHACARE.com; Source: The Norwegian University of Science and Technology

More about The Norwegian University of Science and Technology at: www.ntnu.edu