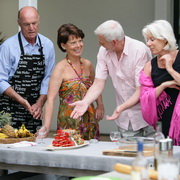 According to research conducted at Rush University Medical Center, frequent social activity may help to prevent or delay cognitive decline in old age. If you want to keep your brain healthy, it turns out that visiting friends, attending parties, and even going to church might be just as good for you as crossword puzzles.

The researchers were especially careful in their analysis to try to rule out the possibility that cognitive decline precedes, or causes, social isolation, and not the reverse.

"It's logical to think that when someone's cognitive abilities break down, they are less likely to go out and meet friends, enjoy a camping trip, or participate in community clubs. If memory and thinking capabilities fail, socializing becomes difficult," said lead researcher Bryan James, postdoctoral fellow in the epidemiology of aging and dementia in the Rush Alzheimer's Disease Center. "But our findings suggest that social inactivity itself leads to cognitive impairments."

The study included 1,138 older adults with a mean age of 80 who are participating in the Rush Memory and Aging Project, an ongoing longitudinal study of common chronic conditions of aging. They each underwent yearly evaluations that included a medical history and neuropsychological tests.

Social activity was measured based on a questionnaire that asked participants whether, and how often, in the previous year they had engaged in activities that involve social interaction – for example, whether they went to restaurants, sporting events or the teletract (off-track betting) or played bingo; went on day trips or overnight trips; did volunteer work; visited relatives or friends; participated in groups such as the Knights of Columbus; or attended religious services.

Cognitive function was assessed using a battery of 19 tests for various types of memory (episodic, semantic and working memory), as well as perceptual speed and visuospatial ability.

Why social activity plays a role in the development of cognitive problems is not clear. According to James, one possibility is that "social activity challenges older adults to participate in complex interpersonal exchanges, which could promote or main efficient neural networks in a case of 'use it or lose it.'"

Future research is needed to determine whether interventions aimed at increasing late-life social activity can play a part in delaying or preventing cognitive decline, James said.


- More about the Rush University Medical Center at www.rush.edu