Hip Implant for Long-term Use 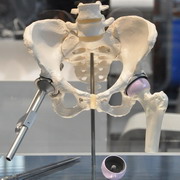 Hip replacement is one of the most frequent operations carried out in Germany. Often the artificial hips need to be replaced just ten years later. In the future, a new implant currently being developed using high technology materials could help prevent premature revision surgeries.

Thanks to artificial hips, people with irreparable damage to the joint have been able to lead active, pain-free lives for the past 50 years. Still, some hip replacements do not function completely as intended, and metal-on-metal implants in particular, demand accurate positioning in surgery and implants positioned non optimally are often susceptible to premature failure notably in small female patients. Physicians are even calling for a prohibition on the use of artificial joints made of cobalt-chromium alloys in which the joint‘s metal ball rubs against its metal socket whenever the wearer walks.

Researchers at the Fraunhofer Institute for Manufacturing Engineering and Automation IPA in Stuttgart, partnering in an international team have now developed a new kind of hip implant that, unlike the conventional counterpart implants on the market today, provide a metal-free solution and bone-like elasticity. This is the result of a metal-free, high-tech composite: The hip socket is made of carbon fibre-reinforced – a high-strength, wear resistant, biocompatible polymer composite. For the femoral head, ceramic was used. In addition to this, a hydroxylapatite coating at the interface to the bone helps ensure that the bone tissue will fuse thoroughly with the surface structure of the implant.

“The cobalt-chromium implants in use to date are very rigid, and the load transfer to the bone is non-optimal leading to potential adverse bone adaptation. Thanks to the new combination of materials, the transmission of force through the hip socket to the pelvic bone is modelled on natural conditions. And there are no metal ions released,” notes IPA engineer Jasmin Hipp. The researcher and her team were able to confirm the good wear resistance in initial tests of the new hip replacement using a robot that simulated various series of movements such as walking or climbing and descending stairs. The experiments used a prototype of the implant.

The implants follow the bone-preserving principle of hip resurfacing: they are thin-walled shells which replace the bearing surface of the joint articulation alone, instead of employing large metal stems for support, which require a substantial volume of bone to be removed. Researchers have also redesigned the way the prosthesis is mechanically attached to the bone.


- More about Fraunhofer Institute for Manufacturing Engineering and Automation IPA under: www.fraunhofer.de