Hip Protectors with a Sporty Look 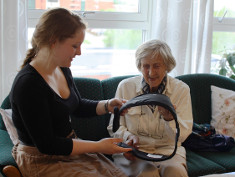 The new hip protector has already been tested by older users; © SINTEF

Norwegian researchers have developed a hip protector in a sporty design. Its looks are intended to appeal to the older people of today – who are quite particular about what they will wear.

Product Designer Tore Christian B. Storholmen, of SINTEF Technology and Society's Health Research department, is looking at some bulky, shapeless pants that are lying on his desk. The pants contain two thick foam pads in pockets at either side, which are there to protect the hips. They are designed to prevent the upper leg fractures and other hip injuries that can be caused by a fall. The problem is that people do not like to wear them.

So coming up with a hip protector in a design that the target group is actually prepared to wear could save the public purse a lot of money. It could also improve people's quality of life and help them live longer.

"Norway sees about 9,000 cases of upper leg fractures every year. The annual costs associated with the treatment of these injuries, rehabilitation and care in nursing homes come to between NOK 1.5 and 2.5 billion", Storholmen tells us. He then shows us SINTEF's version. Slim and sporty, and more importantly, looking like a belt or a discreet bum bag. It can easily be fastened around the hips using Velcro.

"We have been quite surprised at the lack of user-friendly products on the market. There is very definitely a need for a suitable hip protector, and demand has been enormous. This is our third prototype, developed in partnership with the textile company Protex, who will be producing and marketing the hip protector", says Storholmen. “Aesthetics and comfort have been extremely important factors in the development of a hip protector that we can be sure will be used by more people.”

The researchers wanted to get away from the 'surgical support' appearance, and give the new hip protector a sporty design that people would associate more with hiking and an active lifestyle. The modern generation of grandparents has very different requirements to their forebears when it comes to design and appearance: "We have to take that seriously. We have also put a lot of work into finding the optimum shock absorbing material", says Storholmen.

Polyurethane foam is an advanced material that has only recently been developed, and it can absorb up to 90 percent of the impact of a fall. It feels soft, but its properties change on impact, and it becomes firmer, distributing the pressure across a greater area. This allows a thinner, more comfortable design that does not compromise safety.

SINTEF and NTNU (the Norwegian University of Science and Technology) have worked together on evaluating the material, and arrived at a density and thickness that is most suitable for falls and other types of impact. The result of this research can be found in Storholmen's prototype, which is now a thinner, more user-friendly, adjustable belt that can be worn outside clothing. The belt is covered with a breathable material that wicks away moisture.

"We have been working closely with users, physiotherapists and ergotherapists on a continuous basis, have held several workshops and conducted rigorous testing. In the process, we have also been given a few reality checks in terms of the design and its user-friendliness", smiles Storholmen.

According to Storholmen, people have reported that they feel more secure: users feel able to get around without the aid of supports, they have the confidence to walk and be more active, they are more relaxed, and movement is less awkward. The hip protector also satisfies the users' aesthetic demands. They like the style and the choice of material.

Because, despite the fact that today's older generation has a modern lifestyle and is more young-at-heart, the story told by the figures is clear. The risk of a fall increases after the age of 65, and each year, 30 percent of everyone over 65 will have a fall.

"We want our product to be adopted by people in the target group as quickly as possible, so availability has been an important concept. We would like this product to be sold over the counter, for example in sports shops or in shops specializing in support equipment. By making it easily available, thereby increasing its frequency of use, we can help to ensure that older people stay active longer, both indoors and outdoors", states Storholmen.

More about SINTEF at: www.sintef.com