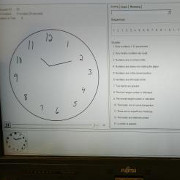 Researchers have created a tool
that allows adults to screen them-
selves for early signs of dementia;
© Georgia Tech

With baby boomers approaching the age of 65 and new cases of Alzheimer's disease expected to increase by 50 percent by the year 2030, Georgia Tech researchers have created a tool that allows adults to screen themselves for early signs of dementia.

The home-based computer software is patterned after the paper-and-pencil Clock Drawing Test, one of health care's most commonly used screening exams for cognitive impairment. "Technology allows us to check our weight, blood-sugar levels and blood pressure, but not our own cognitive abilities," said project leader Ellen Yi-Luen Do. "Our ClockMe System helps older adults identify early signs of impairment, while allowing clinicians to quickly analyze the test results and gain valuable insight into the patient's thought processes."

Georgia Tech's ClockMe system eliminates the paper trail and computerizes the test into two main components: the ClockReader Application and the ClockAnalyzer Application. ClockReader is the actual test and is taken with a stylus and computer or tablet. The participant is given a specific time and instructed to draw a clock with numbers and the correct minute and hour hands. Once completed, the sketch is emailed to a clinician, who uses the ClockAnalyzer Application to score the test.

The software checks for 13 traits. They include correct placement of numbers and hands without extra markings. People with cognitive impairment frequently draw clocks with missing or extra numbers. Digits are sometimes drawn outside of the clock. The time is often incorrect. In addition to scoring automatically and consistently, ClockAnalyzer records the duration of the test and the time between each stroke.

The software also replays the drawing in real-time, allowing a clinician to watch the drawing being created to observe any behavior abnormality. "The traditional paper-and-pencil test is usually overseen by a technician and later scored by a clinician, who scores the test based only on the finished drawing," said Do.

"By looking at the sketch, the scorer is not able to decipher whether the person struggled to remember certain numbers while drawing the clock. The ClockMe system's timing software highlights those delays." And, because they're saved electronically, the drawings can be used to easily compare a person's cognitive ability progress or regression over time. Do's research found that traditional tests are often filed in a folder and are rarely used for future comparison.

The ClockMe system was initially tested at the Emory Alzheimer's Disease Research Center in Atlanta, where it's currently being used in addition to the traditional paper-and-pencil test. Despite a lack of computer literacy, all of the elderly patients who used the software during the study said they had no problems with the pen-based, computer technology.

"For this reason, as well as the ability to send the drawings directly to clinicians for convenient scoring, we envision ClockMe as a viable tool for home-based screening," said Do. "America's health care costs are expected to soar as baby boomers become senior citizens. If a screening tool can be used at home, unnecessary trips to clinics can be eliminated and medical expenses can be saved." Do and her colleagues are hoping to commercialize the project in the future.