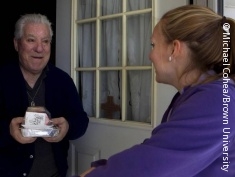 When Congress passed the Older Americans Act in 1965 to support elderly people who were struggling – often alone – to continue to live at home, a major plank of the legislation provided for home delivery of meals to ensure their adequate nutrition. In the midst of the holiday season, a newly published study confirms another benefit of visitors regularly knocking on the doors of seniors in need: a significant reduction in their feelings of loneliness.

"This continues to build the body of evidence that home-delivered meals provide more than nutrition and food security," said study lead author Kali Thomas, assistant professor (research) of health services, policy and practice in the Brown University School of Public Health and a researcher at the Providence Veterans Affairs Medical Center.

The results appear online in the Journals of Gerontology: Series B.

To study whether the program affects loneliness, Thomas analyzed data from a randomized, controlled trial. More than 600 study participants in eight cities who were on Meals on Wheels waiting lists were either given access to daily fresh meal delivery, weekly frozen meal delivery, or simply remained on the waiting list as a control group.

Funding for the research, including the expanded availability of meal deliveries, came from a grant from the AARP Foundation. The study was sponsored by Meals on Wheels America, which released some of the results earlier this year. Now, however, they have been peer-reviewed and published in the scientific record.

The study staff interviewed seniors in all three groups (daily delivery, weekly delivery or continued waiting) at the beginning of the 15-week study and again at the end so they could measure how the seniors' responses changed. The researchers assessed feelings of loneliness at both times with two measures: a standard three-question scale and a separate single question: "Do services received from the home-delivered meals program help you feel less lonely?"

At the beginning of the study there were no statistically significant differences among the three study groups in their degree of loneliness by either measure. On the loneliness scale from zero to nine with higher scores indicating greater loneliness, members of each group on average scored between three and four. But other study data revealed that many of the participants were socially isolated. More than half lived alone, 14 percent reported having no one to call on for help, 25 percent reported participating group activities, and 20 percent had contact with friends and family less than once or twice a month.

"The number of people who reported they had no one to call on for help is a cause for concern," said Thomas, a former Meals on Wheels delivery volunteer.

The study results vary by the loneliness measure, but both methods showed that meal delivery reduced self-reported feelings of loneliness to a statistically significant degree, compared to not receiving delivery. The measures of significance persisted even after the researchers statistically adjusted for possibly confounding factors such as race, income, age, education, living alone, participation in group activities, and contact with friends or family.

After 15 weeks, for example, the average loneliness score of people who did not receive meals was 4.17 but for those who received either weekly or daily delivery it was 3.44. The single-question measure, meanwhile, revealed a difference among people who received daily vs. weekly delivery. Daily recipients were three times more likely than weekly recipients to indicate that home-delivered meal service helped them feel less lonely.

The study is one of few to rigorously examine the long-presumed psychological benefits of home-delivered meal service, Thomas said. She believes it is the first randomized, controlled trial to assess the effect on loneliness, which has been linked by many studies to a greater risk for medical problems, emergency department visits, and nursing home placement.

Thomas said she hopes the study results will be useful as policymakers continue to evaluate the budget and structure of public and private programs that serve the elderly in their homes.

"In a time when resources are being further constrained and demand is increasing, it is important that we have evidence that guides decision-making in terms of what services to provide and how best to provide them," Thomas said.