Hope after High School for Students with Autism 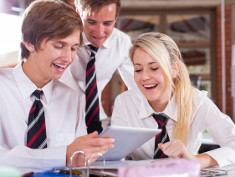 Teachers and other professionals in the schools work hard to achieve beneficial results for students with autism, but positive outcomes remain elusive. An innovative program from UNC's Frank Porter Graham Child Development Institute (FPG) and 6 partner universities is preparing students with autism for life after high school.

"Public high schools may be one of the last best hopes for adolescents with autism – and for their families," said FPG director Samuel L. Odom. "Many of these students will face unemployment and few social ties after school ends."

According to Odom, teachers and other professionals in the schools work hard to achieve beneficial results for students with autism spectrum disorders (ASD). But positive outcomes remain elusive, given the scarcity of specific programs in high schools designed to help adolescents with ASD.

To fill this gap, Odom and other scientists formed the Center on Secondary Education for Students with Autism Spectrum Disorders (CSESA). "We developed our approach from research in several fields," said Odom, CSESA's principal investigator. "Because of the complex educational needs of many students with ASD, it was important to develop a comprehensive program for high schools."

CSESA focuses on understanding emotions, developing friendships, and social problem-solving. Early results at a high school in the Raleigh-Durham, N.C. area show that student groups designed to bring together adolescents with and without ASD have helped them engage with one other more often. "Even a simple hallway 'hello' between students with autism and their peers is more likely now," said Kara Hume, CSESA's project director and co-principal investigator.

CSESA also addresses literacy skills, which can be limited in many students with ASD. At Myers Park High School (MPHS) in Charlotte, N.C., the program helped with Christopher Stickell's inclusion in an English class: "Not only did my son have access to a wider world than his self-contained classroom, but the students in the English class had some of their pre-conceived notions about autism shattered," said Lois Stickell. "Many were surprised when Chris read aloud a passage from 'Julius Caesar.'"

"We help develop basic high school survival skills," Hume said, adding that another cornerstone of the program is its emphasis on promoting responsibility, independence, and self-management.

According to Odom, many teens with ASD continue to live with their parents after high school. "Not surprisingly, parents worry about the future as they anticipate their child's transition out of the public schools," he said.

"CSESA has provided opportunities for greater collaboration and relationship building with the families who have attended 'Transitioning Together' sessions," said Phyllis Alston, the exceptional children teacher for compliance at MPHS. Each week, CSESA staff and school district personnel lead these discussion groups with families.

"We became aware of resources available that without CSESA we may not have been made aware of," said Faith Hamilton, whose teenager will be attending Central Piedmont Community College in the fall to study photography. "My son gained confidence and his grades improved this year."

According to Odom, built into the CSESA program's design are features that help to install it quickly and successfully, such as "autism teams," which spearhead efforts within the schools. The program also uses coaching to provide feedback on new practices as teachers implement them.

Although most complex programs may take 5 to 7 years to put into place, Odom said schools in N.C. and 5 other states began using CSESA's approach within weeks, and he projects that they will be administering the program on their own within 2 ½ years.

"CSESA will expand to 60 more schools over the next 3 years," he added. "We hope a lot more students with autism spectrum disorders will be able to leave high school better prepared for the challenges they'll face."