How makerspaces can be more accessible to people with disabilities 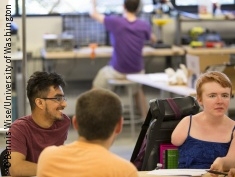 Inside the University of Washington's (UW) CoMotion MakerSpace, students, faculty and staff use sewing machines to create anime convention costumes, 3-D print models for aeronautics research or make circuits for a custom-built amplifier.

Inspired by the DIY movement, these communal spaces with soldering irons, laser cutters, saws, duct tape, pegboards full of tools, butcher paper, crayons and other "making" tools are popping up across the country. They enable a broader array of people to tinker, create, crochet or prototype whatever invention they can dream up.

To ensure those spaces are truly inclusive, a team of UW researchers has released new guidelines aimed at ensuring makerspaces are accessible to people with disabilities.

The effort is part of a broader National Science Foundation-funded AccessEngineering initiative, which supports students with disabilities in pursuing engineering careers and promotes accessible and universal design in engineering departments and courses.

"A lot of universities are creating these more casual prototyping spaces where students can have more of a DIY experience, as an alternative to a traditional machine shop," said AccessEngineering co-principal investigator Kat Steele, a UW assistant professor of mechanical engineering whose Human Ability & Engineering lab focuses on developing tools for people with cerebral palsy, stroke and other movement disorders.

"Because this is a big growth area for engineering schools, we wanted to help with some best practices and guidelines so that as these new spaces are being created they can be accessible to the widest group possible," she said.

On a recent tour of the UW's 6-month-old CoMotion MakerSpace, students with an array of disabilities – from cerebral palsy to vision impairments to autism – found a lot to like. The open spaces worked for people in wheelchairs, and floors were free of wires that could trip people or snag wheels. A wide range of materials and tools allowed people with differing abilities to find things to work with. Quiet rooms around the perimeter of the space offered a refuge for people with hearing impairments or neurodevelopment disorders who have trouble filtering out background noise.

During a prototyping challenge that allowed them to test the tools, though, they did encounter unique challenges in sketching, building and sharing their ideas. Items on their wish list to make the makerspace more usable – which helped inform the new accessibility guidelines along with previous research – included:

• large print and braille labels for tools
• adjustable-height tables with push-button adjustments to accommodate individuals using wheelchairs
• eliminating tiny drawers that store screws, nuts, bolts and electrical equipment that are difficult for people with motor impairments to open
• multiple mouse and keyboard options
• guards on sharp objects so people who use their fingers to "see" won't inadvertently cut themselves
• high-contrast, large-print instructional and safety signs
• making all tools and safety equipment accessible from a seated position
• having tactile prototyping tools available, such as clay that can be used to quickly "sketch and share" ideas

Incoming UW freshman Hannah Werbel, who is legally blind and participated in the UW DO-IT Scholars program that helps students with disabilities prepare for college, found the bright yellow electrical outlets hanging from the ceiling – which are designed to keep wires off the floor – were at just the right height to be hazardous.

"Those outlets are my arch nemesis – I can't tell you how many times I've been bonked in the head or chest," Werbel said. "Even if they're right in front of my face, I can't see them because of depth perception issues. And a cane wouldn't pick them up because they're not on the ground."

Work tables on wheels were a plus, since they allow people to reconfigure the space as needed and move if people accidentally bump into them. But the students suggested that makerspaces keep equipment – 3-D printers, laser cutters, tools, sewing machines – in the same location.

"The everything-on-wheels thing is really good for people in wheelchairs," said UW sophomore Kayla Wheeler, a congenital amputee who was born with no legs and one arm. "But I could see how it would be really hard for people who can't see and are trying to make a mental map of the room if everything keeps moving around."

The UW's AccessEngineering program helps train faculty from across the country in universal design, which means designing spaces, curriculum or environments that work for the widest possible array of people. The program also provides mini-grants to help engineering schools incorporate those principles.

The program has previously released checklists and guidelines for making engineering labs, departments, instruction, projects and computer labs inclusive of people with disabilities. Many of those recommendations, from large print labels to clutter-free workspaces, wind up benefiting everyone.

The idea for makerspace guidelines arose, in part, because so many new computer-aided design tools – such as 3-D printers or laser cutters – are making it easier for people with disabilities to explore their creativity, prototype ideas and invent.

"It's really important to make sure these spaces are accessible precisely because these technologies are so enabling," Steele said. "Engineers are problem solvers, and the more diversity we have in the field the more problems we'll be able to solve, because everyone comes to that process with different life experiences and priorities."